In Khabarovsk orphanages on a hunger strike near the government building 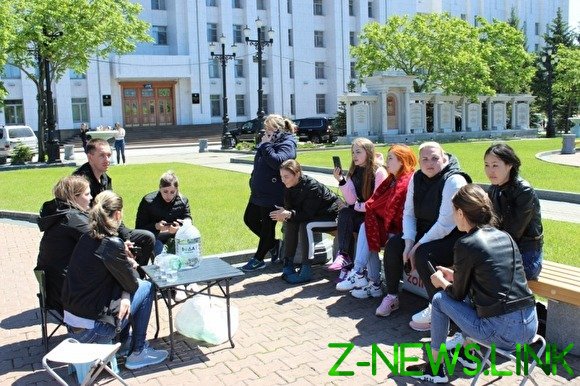 In Khabarovsk, on the square in front of the regional government orphanages began a hunger strike. The protesters say they are unable to put them under the law of housing.

“We have a court decision, which allowed housing. We all have more than 25 years, and the average length of time apartments is 10 years. We have repeatedly pestered the administration and the Prosecutor’s office. Even wrote to the Prosecutor General. But the answer has not followed, — quotes news Agency AmurMedia one of the participants of the hunger strike.

See also:  In Odessa took place the collapse of a residential building

Edition DVHAB.ru reports that protesters have set on the benches on Lenin square, some brought folding chairs. Judging by the published photos, the hunger strike involved about ten people. According to the journalists, orphans determined. “Until we get concrete results — will not go”, — they say.

The edge of the government know about the situation. Earlier, the Governor met with the initiative group, but to solve them efficiently the problem is not yet possible.

“With this group of orphans, the Governor met a month ago. But this time, to build a new house is impossible — the problem evolved over the years, and we this turn had inherited. In General, this year we plan to deliver more than 580 apartments for orphans — most of those who staged this protest will get housing before New year,” — said DVHAB.ru press Secretary of the Governor Hope, Tomchenko.