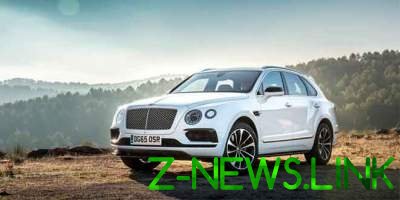 Officially, the new car show in July of this year.

Many booed and criticized Bentley for trying paralizovat Audi Q7 is the most expensive SUV in the world, the Bentayga. Now we know they were wrong. Then the sound of indignation came out the Bentley Bentayga diesel engine from SQ7, but again the criticism was unjustified.

In 2018 Bentley is preparing to introduce economical Bentayga with a Porsche engine, and then the hybrid. In light of the last unjustified criticism, it is time to accept the fact that the success Bentayga in all forms.

The Bentley Bentayga will borrow the Hybrid powertrain from Porsche Panamera 4 S E-Hybrid: it promises a big crossover around 462 HP of power and 700 Nm of torque. The fourth and last modification Bentayga will get a new 4.0-liter V8 engine with two turbines Porsche, used in Lamborghini Urus. In the case of the Bentayga it will reduce power to 550 HP, less than the 6.0-litre W12 in the standard version of the model.

According to the German magazine Auto Motor und Sport, Bentley Bentayga with a petrol V8 will officially show in July 2018. “Why Bentley needed to add two power plants to the most luxurious SUV in the world?” The reasons are simple: as a hybrid, and gasoline V8 will cost less than the W12 version, which will allow the Bentayga to attract more customers.

Production volumes are critical to the success of the Volkswagen Group. In the case of Bentley does not exist another model that is able to equate sales with the Bentayga. Which side do not consider this set of circumstances, the hybrid and the new V8 in the range Bentayga is destined to be.