Home / WORLD / “I’m the only Muslim in the world who’s blown up a market and got away with it,” says provocative British filmmaker Rizwan Wadan

“I’m the only Muslim in the world who’s blown up a market and got away with it,” says provocative British filmmaker Rizwan Wadan 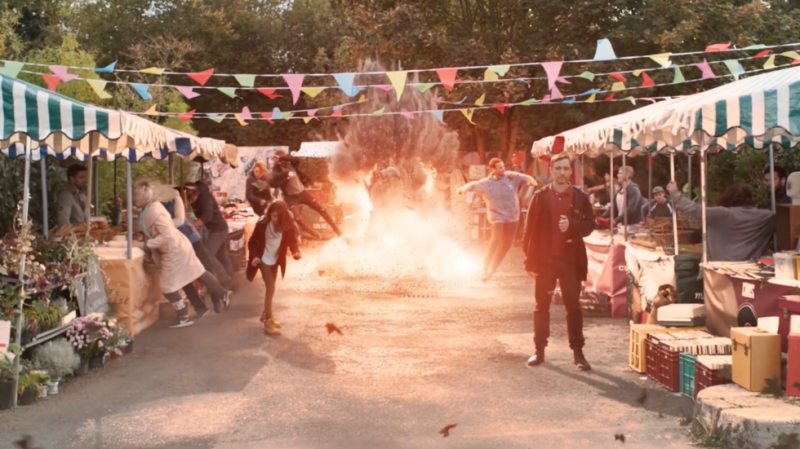 A video of a Muslim blowing up a crowded market could be seen as reinforcing a stereotype, but not to Rizwan Wadan of Pixeleyed Pictures.

He’s the driving force behind the Error in Terror campaign, which has just launched a controversial new video.

Clocking in at under two minutes, it cost £1.2 million to create and is aimed at breaking the association between Islam and terrorism.

Wadan, an immigrant to the UK from Pakistan, has been on a mission since the 7/7 London bombings back in 2005. That day saw the nation gripped with fear as a team of four suicide bombers left 56 people dead. However, he bristles at the idea of his release marking an anniversary.

Speaking to RT.com while on location, he said, “It’s a commemoration – an anniversary means you are celebrating something and there’s nothing to celebrate. We are trying to unite communities and we’ve made a really powerful visual deterrent. I abhor the terminology ‘Islam terrorism’; it’s like a double negative. We’re just people and evil has no religion, race or nation.”

When 7/7 happened, Wadan was studying English at the University of Roehampton in London. His plan was to teach Islamic scholars to communicate more effectively. While he remains religious, Wadan is an extremely positive and fun character, breaking another lazy stereotype. Our interview is peppered with bouts of laughter, illustrating that he is determined to change the tone of the debate.

He feels, somewhat ironically, that Error In Terror sees him back on his original career path. “In some strange way I am doing the same thing through film,” he explained.

The coverage of Muslims following 9/11, along with the notoriety of preacher Anjem Choudary culminated in 7/7, convincing Wadan to take direct action.

He continued, “I just thought these people do not represent what Islam stands for. What I was seeing on the screen was an image, so what I’ve got to do is grab that image, take it from something negative and point it at the things it’s not being pointed at. I picked up the camera, and have never studied so hard in gaining these skills.”

Along the way, he has carved out a successful career in the film industry and has worked on projects including blockbuster Rogue One: A Star Wars Story, TV shows such as The Tunnel and Luther, plus Disney movie Artemis Fowl.

Despite these credentials, not everyone welcomed his shocking approach.

Wadan said, “Some of the Muslim community are not happy for me to use a Muslim character [in his latest video]. I’ve been criticized, [with some] saying it reinforces the stereotype.

“But I said to them ‘I’m going to say a word and tell me what image comes into your head,’ and I said, ‘Terrorist’. This scholar looked at me and said, ‘I see your point’.

“I’m not creating a character with an image that is not already assigned to the word terrorist. We’re trying to empower the next generation; we’re showing them, this is how you can blow up a market place.”

While that sounds alarming, the concept behind the Error in Terror video is that Wadan sees attacks as the perpetrator’s personal expression. That mindset is normally applied to art, music or poetry. Is it really fair to regard a bombing as a form of expression?

He said, “Everything we do is a form of expression. Ultimately what you do leaves behind a story. We are living in a day and age where cameras are there, so the real lessons for these individuals is that you’re going to become someone’s story and someone is going to edit that story – what do you want to be, and what message do you want to leave behind?

“I’m the only Muslim in the world that’s blown up a market place and got away with it. I can go blow up another market place, I’ve lived to tell the tale.

“ There’s a way to express yourself and film as a medium is undeniably one of the most powerful tools, and one of the most effective means of communication that humanity has seen. Why not use that?”

To prove this point, as part of the campaign, Wadan travelled around England to communities who have little or no interaction with Muslims. He set up in local pubs and put the video on a big screen. The positive response he has received proves to him that the direct approach is working.

Wadan said, “I have never felt uncomfortable anywhere in this country; if you have these walls around you then you’ve got a problem within yourself that you’ve got to overcome first.

“Going into those pubs… I’ve got a big beard, I’ve got bags and they’re thinking, ‘Is this my last pint?’ It was quite funny to be honest. It is a visually stunning piece; there is an explosion, it’s in your face, straight to the point.

“It’s about overcoming someone’s differences, helping someone to overcome the negativity within themselves and hatred. They are holding onto this weight and you can help to alleviate that.”

One topic that Wadan and this team delved into in these pubs is where people got the idea that Muslims were terrorists. The answer is generally the media.

He explained, “When individuals realise ‘Maybe I’m incorrect in the way I think,’ we ask them where did you form these ideas? They literally blame the news, the TV channels – I won’t say the channel that gets blamed a lot, but it begins with a B. Rather than pointing fingers, we’re trying to provide solutions.”

In a strange twist of fate, the video was due to be launched last year on March 23, to mark the 2017 Westminster attack when Khalid Masood drove a car along a pavement before stabbing a police officer to death.

But then came the national lockdown – something Wadan feels was ultimately a positive, as he believes Error in Terror is now perfectly timed to continue one theme that emerged from the pandemic.

He said, “I lost my mother this year and I know many people have lost their loved ones, but there is some sort of a silver lining to the pandemic that we can’t forget. If there’s something we’ve learned, it’s what this country stands for. On a grassroots level for one priceless moment; hatred, racism, intolerance, all of that went out of the window. We had an external threat and everyone was helping each other.

“For three or four months, we didn’t hear anything negative, and we’ve got to learn from that as we’re coming out of this.”

The release of the video does not mean the end of the road for Wadan’s campaign. It will be shown in 150 cinemas across the UK before movie screenings and he also plans to reply to French movie director Luc Besson’s open letter to Muslims, which called on them to reject extremism, that was published in the wake of the Charlie Hebdo attack in Paris in 2015.

Wadan refers to part of that letter as “condescending” and added, “Error in Terror in a way is a response to his letter. I reached out to him for this campaign. He’s written this open letter, but what he could have done is said: ‘Is there a Muslim creative that I can support and do something?’”

And he has some strong words on the publication of the Prophet Muhammad cartoons which prompted the attacks. Said Wadan, “Firstly, as a Muslim, we believe you’re not supposed to distinguish between any messengers. If you’re a Muslim and you haven’t protested at the several episodes of the Simpsons with Moses and Jesus, then just sit down.

“If you as a Muslim haven’t stood with your Jewish brethren to oppose any cartoons of Moses and not done the same with your Christian brothers and sisters when Jesus was misrepresented, then what are you doing, making that distinction?”

Along with breaking down barriers, Wadan wants to see more Muslims seize the narrative and enter the creative industries.

He says there are feelings holding them back that need to be dismissed.

Wadan claimed, “If you don’t like your image and the way you’re presented, guess what? You’re going to have to be involved in that industry to be able to tell your own story.

“As Muslim people, you should be telling your own stories and if you’re not doing that, maybe you’re part of the problem. The Muslim community is the only one that’s been really behind in filmmaking. Who better to be helping shape a more positive narrative about a community than members of that community like myself or Riz Ahmed, Man Like Mobeen and Dave Chappelle? The next generation are literally watching and hooked, so we have got to create content.”

Many believe that Britain has never been more divided, and that the current government is creating an environment that’s hostile to immigrants and sowing the seeds of cultural division. Wadan is not someone who submits to that and thinks actions speak louder than policy.

He said, “It’s easy to look at Boris Johnson as the figurehead and say that he or [Home Secretary] Priti Patel are the problem. Is it a good time for Muslims, non-Muslims or anyone to live in Britain? It’s an epic time to live in the UK and an amazing time to be alive.

“Boris Johnson doesn’t have control over how we think and treat each other, and what we do. He’s said some things I wasn’t happy with, but so do my friends, so do my brothers and sisters. We have to stop just thinking about ourselves.”