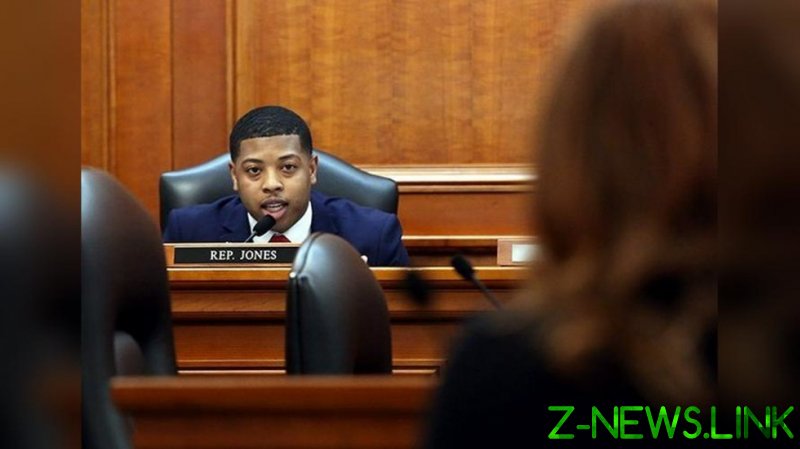 “I’ll call Governor Whitmer right now,” the 26-year-old Democrat from suburban Detroit is heard saying on the video. He added, “When I call Gretchen, I’ll need y’all IDs and badge numbers, everything,” and later said, “If you abuse me, I’m going to get upset. I’m going to tell Gretchen . . . and I’m going to get you all on desk duty, bro. I’m telling you.”

The incident occurred earlier this month, after Jones allegedly crashed his sport-utility vehicle into a ditch while traveling on Interstate 96 toward the state capital. Police allege that he had a blood-alcohol content of 0.19%, more than twice the legal limit, and that he resisted arrest. Police also found a Glock pistol in the SUV’s cupholder.

Jones’ apparent attempts to leverage his political influence didn’t stop at threatening to call the Democrat governor. “It’s not going to be good for you, I’m telling you,” he told two troopers as struggled to handcuff him on the ground. “I run you all’s budget, bro.”

The state lawmaker accused police of harassing him all the time and abusing him because he’s black. “You all don’t know who you all dealing with, bro,” he said.

When dropping Whitmer’s name apparently didn’t persuade officers to let him go, Jones invoked the name of Michigan State Police director Joe Gasper. At one point, he said he wanted Gasper to handle the arrest. “If someone else take me in, I’m going to be upset, and I’m going to come at you all,” he said.

Later, when he was handcuffed and sitting in the back of a police vehicle, Jones told a trooper to call Gasper. “Tell Joe who you got and call f**king Joe,” he said. “I’m not sure whether he’s up or not. If he’s not up, wake him up. Tell Joe who you have, tell Joe who you have handcuffed, OK? . . . Let him know that I would like to go home. After that, let me go f**king home.”

Jones then offered to make the call to Gasper. “You want me to call him?” he asked. “I’ve got like 10 troopers around me. I’ll call him myself. I’ll call him and tell him I would like to go home.”

But a lawyer for Jones, who was Tasered twice and hit with pepper stray while allegedly resisting arrest, told NBC News that his client was “fully cooperative” with troopers and only wielded political influence “to stop them from using excessive force.”

That statement was issued before the release of dashcam footage, which appears to show Jones ignoring commands and resisting arrest. He was still name-dropping while cuffed and sitting in the back of a police vehicle.

Jones is a volunteer auxiliary police officer for the city of Inkster, west of Detroit. At one point during his clash with troopers, he told them to drop him off at his home or at the Inkster police station. “I can give you my address,” he said. “You can drop me off at the crib.”

The Jones arrest isn’t the first name-dropping incident involving Whitmer. The governor last May urged Michiganders not to jam waterfront attractions on Memorial Day weekend, after lockdown rules were eased, but her husband reportedly tried to arrange a trip to a popular area on Traverse Bay. He asked if his boat could be put in the water sooner at the local marina because of his wife’s position. Whitmer later dismissed the request as “a failed attempt at humor.”