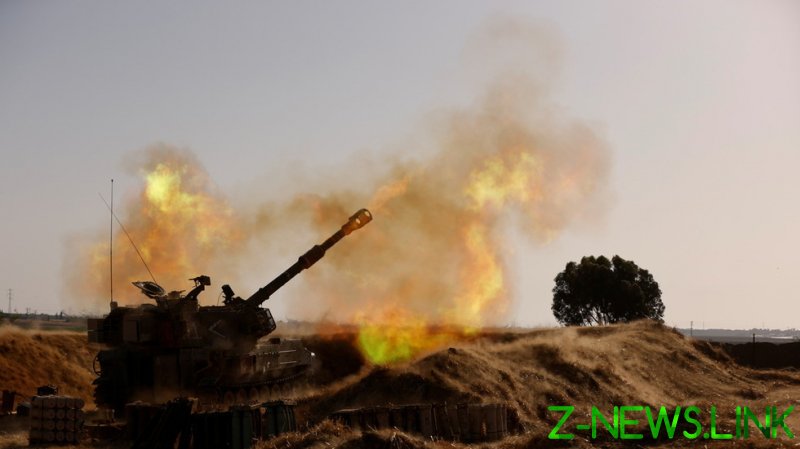 Artillery, tanks and infantry are firing into the strip but have not crossed its boundary yet, according to a reporter with the Israeli public broadcaster Kan 11.

“I said that we would exact a very heavy price from Hamas,” Israeli PM Benjamin Netanyahu said shortly after the IDF announcement. “We’re doing it and will continue doing it with great intensity. This is not the last word and this operation will continue as long as necessary.”

Ground troops have been spotted deploying to the border with the enclave on Thursday, with an IDF spokesman confirming they were in “various stages of preparing ground operations.”

Lieutenant Colonel Jonathan Conricus said the IDF had “a division headquarters and three maneuver brigades down in Gaza preparing themselves for that situation and for various contingencies.”

Israeli drones, helicopters and fighter jets have been striking strip since Monday, after the militant Palestinian groups Hamas and Islamic Jihad began launching rockets into Israel. The groups said their actions were reprisal for the Israeli eviction of Palestinians from the Sheikh Jarrah neighborhood of Jerusalem and “repression” of protesters at the Al-Aqsa mosque on Jerusalem’s Temple Mount.

Hamas and Islamic Jihad claimed to have launched more than 1,500 rockets into the cities of southern and central Israel since May 10. On Thursday, three rockets were also fired from inside Lebanon, to the north.

Six Israelis have been killed so far, including one IDF soldier and a six-year-old boy. Health officials in Gaza said that over 100 Palestinians, including 27 children, had fallen victim to the Israeli strikes as of Thursday, while almost 600 people were injured.

Israel has bombed over 650 targets in Gaza, destroying several high-rise buildings in the densely-populated Palestinian enclave. The IDF said its strikes have killed dozens of militants, including some top Hamas commanders.

The last time IDF ground forces entered Gaza was in 2014, during the seven-week Operation Protective Edge. There was also a three-week incursion in late 2008, running into 2009. The strip has been under control of Hamas – a militant Palestinian organization – since the local elections in 2007, two years after Israel declared unilateral withdrawal of troops and settlements from the strip.

Gaza is the part of the original Palestine Mandate annexed by Egypt after Israel declared independence in 1948. It was occupied by Israeli troops during the Six-Day War in 1967.