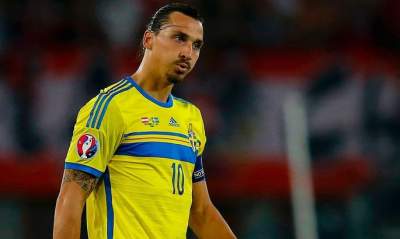 Ibrahimovic left Sweden after his defeat by Portugal in the play-offs for Euro 2016, but recently have Zlatan there was a serious reason to return to the national team.

Sweden under the leadership of Janne Andersson in the joints for the world Cup sensationally beat Italy for the first time since 2006, broke into the final stage of the world championship.

“RMC”, citing a source close to Ibrahimovic, reports that Zlatan to participate in the world Cup in Russia is ready to resume international career.

The coaching staff of the Swedish national team has not yet commented on a possible comeback of Ibrahimovic, but it is unlikely that Andersson will be delighted with claims Zlatan to get into the final squad, because in this case Russia will not go to one of the players who have a direct relationship to successful qualification for the world Cup.

Zlatan Ibrahimovic spoke to the Swedish national team from 2001 to 2016 (116 matches and 62 goals). Now striker “Manchester United” recovering from a serious knee injury.