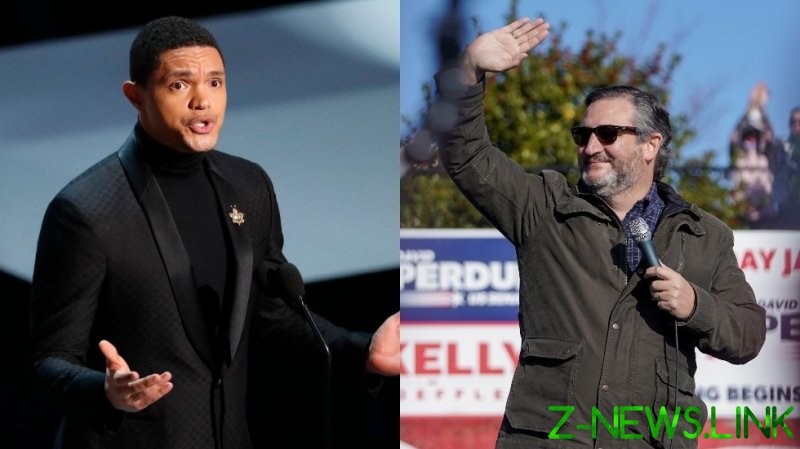 Noah addressed recent news that census results showed New York was 89 people short of keeping one of its 27 seats in the House of Representatives and that Texas had earned two more thanks to an influx of new residents migrating to the red state.

The comedian used the segment as an opportunity to take a shot at one of Texas’ senators, Ted Cruz.

“Aside from New York getting screwed, the big news out of the census is that America’s population grew at the slowest rate since the 1930s,” he said. “Basically, immigration is down and the birth rate is falling, primarily due to this photo.”

A picture of Cruz wearing a baseball cap then appeared.

Cruz, who is known for getting into public spats with liberal celebrities, jumped into the red state vs. blue state debate on Wednesday, noting that people are moving from “high tax” states like New York to “low tax” areas such as Texas.

“Doesn’t understand why people like freedom,” Cruz wrote about Noah.

He then mocked Noah for comparing the current situation in the US to the Great Depression, which the comedian said on his show “sucked for America.”

Others blasted Noah and, like Cruz, accused him of ignoring the reasons why some Americans have been migrating from places like New York.

Both Cruz and Noah trended on Twitter as yet another partisan battle split users, and the two public figures continued insulting each other, with Noah referring to Cruz as “Senator Cancun” – referencing Cruz’s controversial trip to Cancun as Texas faced major power outages during a winter storm in February.

“Not sure I’d be using the words ‘fleeing’ and ‘Texas’ in the same sentence, Senator Cancun,” Noah tweeted.

“I wear your scorn with pride,” Cruz replied, adding that he remembers when ‘Daily Show’ was “funny.”

Noah continued to blast Cruz, and even previous ‘Daily Show’ host Jon Stewart, who hosted the show for years before Noah took over, jumped in to support his replacement.

Cruz faced plenty of criticism and insults, too, including from other celebrities, over the tiff.

“He’s so bad at this,” liberal activist and ‘Star Trek’ actor George Takei tweeted about the Texas senator.