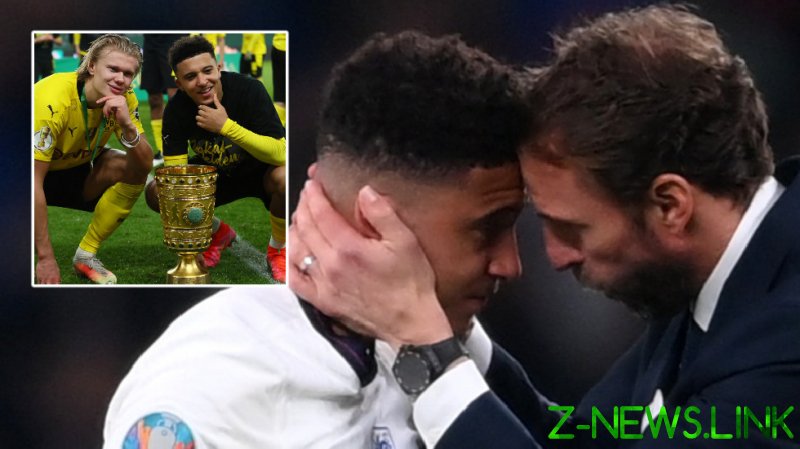 Livewire Sancho came on alongside new Manchester United team-mate Marcus Rashford in the dying seconds of extra time against Italy, with manager Gareth Southgate introducing the pair in the hope that they would convert from the spot in the looming shoot-out that could have made England Euro champions for the first time.

On the verge of his expected $100 million move from Bundesliga club Borussia Dortmund to United, sensation Sancho has broken his silence to reflect on the final, admitting that he “still feels a mix of emotions.”

“I would like to say sorry to all my team-mates, coaching staff and, most of all, the fans who I let down,” the 21-year-old told his millions of social media followers.

“This is by far the worst feeling I’ve felt in my career. It’s hard to even put into words the real feeling, but there were so many positives to take away from this tournament, though the defeat will hurt for a long time.

“And that’s exactly what I wanted to do with that penalty: help the team. I was ready and confident to take it: these are the moments you dream of as a kid, it is why I play football.

“These are the pressured situations you want to be under as a footballer. I’ve scored penalties before at club level – I’ve practised them countless times for both club and country. So I picked my corner, but it just wasn’t meant to be this time.”

England emerged with an enormous amount of credit after conceding only two goals throughout the tournament to reach the final and almost earn a first major trophy since the 1966 World Cup.

“We all had the same ambitions and objectives,” explained Sancho. “We wanted to bring the trophy home.

“This has been one of the most enjoyable camps I’ve been part of in my career so far. The togetherness of the team has been unmatched – a real family on and off the pitch.

“I’m not going pretend that I didn’t see the racial abuse that me and my brothers Marcus and Bukayo received after the game, but sadly it’s nothing new.

“As a society, we need to do better, and hold these people accountable. Hate will never win. To all the young people who have received similar abuse, hold your heads up high and keep chasing the dream.”

Speaking in the UK Parliament on Wednesday, Johnson insisted that trolls who send racial abuse online would be banned from matches. A man – identified by some reports as a 50-year-old coach – has also been arrested for targeting Rashford.

Dortmund wonderkid Erling Haaland, who has been linked with a $150 million move to the likes of Barcelona, Real Madrid and Chelsea, left a supportive response for Sancho, as did England fringe player Jesse Lingard and Alphonso Davies, a wideman for German champions Bayern Munich.

“Beautifully put, Jadon,” replied the official England account. “We know that you’ll come back stronger from this, there’s no doubt about it.

“Keep your head held high and be proud of playing your part in an incredible journey for us this summer.”

Dortmund and Belgium’s Axel Witsel responded: “Head up, bro. Just keep doing your thing – you are an amazing player.”

Few England fans would agree with bright spark Sancho’s harsh assessment of his part in a run to the final in which their team exceeded expectations, and his often-electric talent will be more visible to viewers in his homeland next season, which will be his first in the Premier League after four years in Germany.

“I am proud of this England team and how we have united the whole nation in what has been a difficult 18 months for so many people,” he said.

“Much as we wanted to win the tournament, we will build and learn from this experience going forward. I want to say a massive thank you for all the positive messages and love and support that far outweighed the negative.

“It’s been an honor, as always, representing England and wearing the Three Lions shirt, and I have no doubt we’ll be back even stronger.”