Home / WORLD / Going for gold: Russia to eliminate US dollar from sovereign wealth fund THIS MONTH amid warning of politics sabotaging currency

Going for gold: Russia to eliminate US dollar from sovereign wealth fund THIS MONTH amid warning of politics sabotaging currency 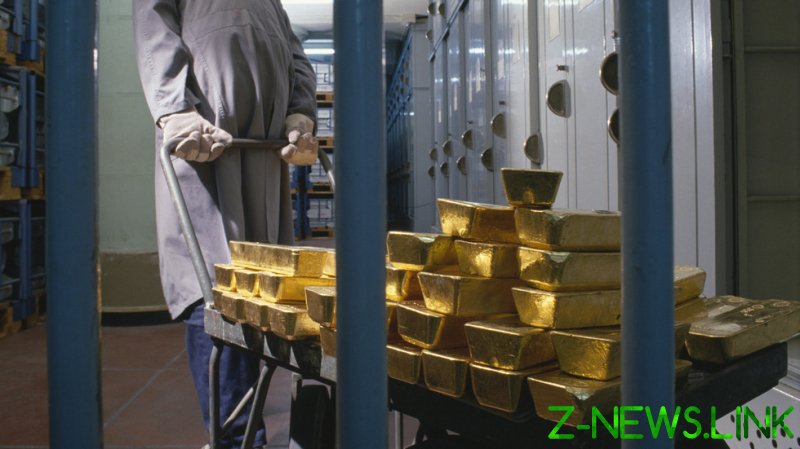 Anton Siluanov said that the National Wealth Fund would reduce its share of dollars to zero within the next month. Speaking as part of the St. Petersburg International Economic Forum, he said that the process would be “fast enough” and would mirror a similar move by the country’s central bank to reduce assets held in American currency.

Under the plans, the proportion of dollars in the fund will fall from 35% to zero, while assets held in euro and the Chinese yuan will increase to 40% and 30%, respectively. The share of the British pound will halve, from 10% to 5%, while the investment vehicle will buy into gold for the first time, with 20% of its assets to be hedged on the precious metal.

Speaking later on Thursday, Kremlin spokesman Dmitry Peskov backed the decision, saying that “the de-dollarization process is constant. It is, in fact, now visible to the naked eye.” He added that the move away from financial dependence on Washington “is taking place not only in our country, but also in many countries around the world, which have begun to experience concerns about the reliability of the main reserve currency.”

In April, Deputy Foreign Minister Alexander Pankin told journalists that political tensions between Washington and other nations were undermining faith in the currency overseas. The imposition of sanctions and an unpredictable economic policy, he argued, “call into question the reliability and convenience of using the American currency as the priority currency of deals.”

As a result, the minister said, countries are now being “forced to take measures against the risk of economic losses and disrupted transactions. Therefore, there is increasing interest in developing alternative mechanisms. Using other currencies in trade is becoming more and more important on the international agenda.”

Russia has championed a push away from the use of the dollar as the default global currency of trade and transactions. Last June, Sergey Naryshkin, the head of Moscow’s foreign intelligence service, the SVR, said that “it seems bewildering that the US continues to be the holder of the main reserve currency while behaving so aggressively and unpredictably.” He added that “the monopoly position of the dollar in international economic relations has become anachronistic. Gradually, the dollar is becoming toxic.”