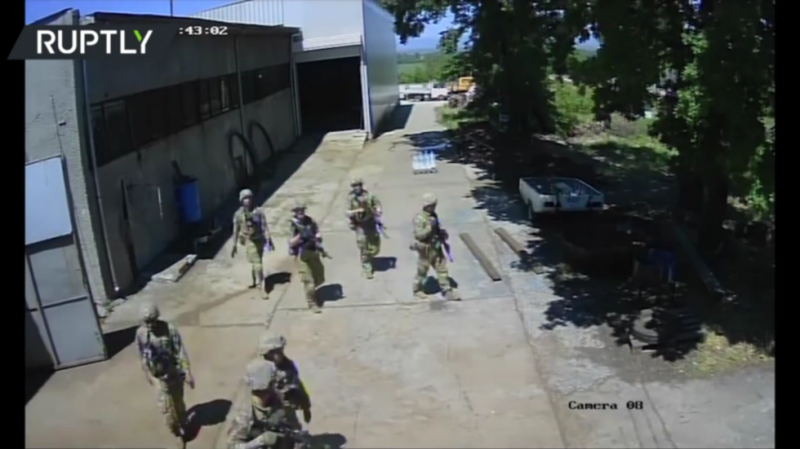 The brief armed incursion happened on May 11, while Bulgaria was hosting US and other allied soldiers participating in the Swift Response exercise. However, the Bulgarian public only learned about it on Friday, after the owner of the raided factory spoke to national media.

Footage from the factory’s security cameras showed seven US soldiers armed with assault rifles and moving in fire teams to secure the facility, with no resistance from the workers. After finding no ‘enemy’ combatants, the Americans left.

The US Embassy in Bulgaria said it learned about the incident only this week and was deeply sorry about it. The incursion was made by soldiers assigned to the 173rd Airborne Brigade, who strayed outside the designated area of the exercise at the Cheshnegirovo Air Base, where they trained in “entering and clearing multiple bunkers and structures across the airfield.”

“The US Army takes training seriously and prioritizes the safety of our soldiers, our allies, and civilians. We sincerely apologize to the business and its employees,” the embassy said.

The raided Kim Engineering factory is located near the airfield, about 20km (12.4 miles) east of the city of Plovdiv. The firm specializes in making oil refining equipment for biofuel production. The owner, Marin Dimitrov, said his workers were terrified by the experience.

“All my workers are experiencing huge stress. How can they put up with such an invasion? I think they are offended,” he told the media.

Bulgaria’s Defense Ministry downplayed the incident as “an obvious misunderstanding” that didn’t involve use of force or mistreatment of civilians, but it agreed to pay the factory for any possible material damage.

The Bulgarian military is currently investigating why information about the US incursion remained hidden from the public for almost two weeks. But Georgi Panayotov, Bulgaria’s envoy to the UN and currently also the country’s acting defense minister, said during a media conference that there was no attempt to cover-up the incident.

This did not stop some Bulgarian opposition politicians from calling for Panayotov’s resignation. “Does the defense minister want people with weapons to break into his home and how would he call it,” the nationalist Attack party demanded, responding to the media briefing and the assertion that no violence was used. Panayotov headed the NATO department in the Bulgarian Foreign Ministry, which, the party believes, makes him biased and unfit to review the situation.

Swift Response 2021 was a US Army-led multinational exercise involving more than 7,000 paratroopers from 10 NATO allies.