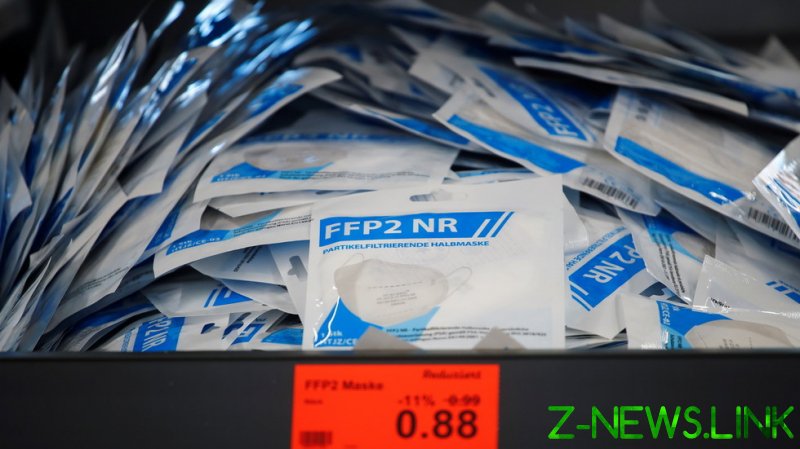 In December 2020, every German over 60 as well as people with pre-existing health conditions were entitled to receive three FFP2 masks at any pharmacy free of charge, courtesy of the German Health Ministry, and personally of Minister Jens Spahn. The plan was to provide relief to the most vulnerable members of society ahead of the Christmas holidays.

But what seemed to be a generous gesture by the government is about to backfire, as the German media has found out just how much taxpayer money Health Ministry officials spent on the campaign.

According to a joint investigation by German broadcasters WDR and NDR, as well as the Sueddeutsche Zeitung newspaper, the entire affair cost €2.5 billion ($2.98 billion). The issue appears to be that, instead of just buying masks and distributing them among the targeted population groups, the ministry devised a rather complicated scheme involving compensation to individual pharmacies that were tasked with actually distributing the masks.

Under this plan, which was developed in the autumn, the government assumed that a total of 27.3 million people would be eligible for free masks. Officials then estimated the cost of the masks, assuming they would pay €6 for each one, and simply transferred the entire amount of €491 million to the German pharmacists’ association to cover the cost of the first three masks per person.

The association then distributed the money among the individual pharmacies. Each pharmacy received fixed compensation of €25,000 on average regardless of how many masks it actually distributed.

What is particularly puzzling is that for each mask, the ministry paid roughly six times more than the market price, as the pharmacists interviewed by the media said they planned to sell the masks at around €1 each. “We earned absolutely stupid money,” Berlin pharmacist Detlef Glass told the journalists.

Some politicians say the ministry could just as easily have bought enough masks to supply every single person in Germany with that amount of money. “It would probably have been easier to send masks to all people,” German MP Karl Lauterbach said, adding that “it would hardly be any more expensive.”

In fact, some German officials did just that. In February, the German city of Bremen decided to supply all 600,000 of its residents aged 15 or older with five masks each within two weeks at a cost of €1 per mask. The city was about to spend €3 million on this campaign.