Home / WORLD / Galloway: Why is the BBC so keen to portray me as a Russian agent when I’m trying to prevent the break-up of the UK?

Galloway: Why is the BBC so keen to portray me as a Russian agent when I’m trying to prevent the break-up of the UK? 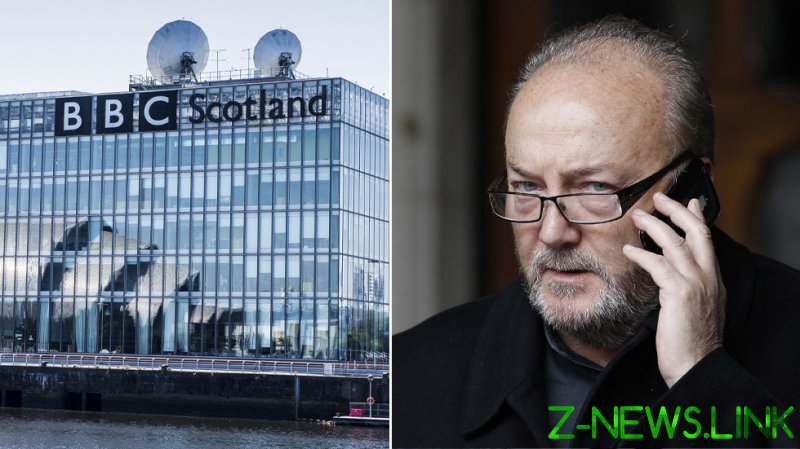 The state-backed broadcaster BBC is currently bedecked in black, as quite befits a state-backed broadcaster on the occasion of the demise of a prominent personage of the state that backs it. I have no problem with the BBC being a state broadcaster – many countries have them – but rather with the maiden aunt horror with which it deploys this designation at others while pretending it is the very acme of independent journalism.

In fact, quite a lot of people wonder why the BBC doesn’t seem to like Britain very much, despite being bought and paid for by the British people through a compulsory and whopping licence fee – the non-payment of which can end you in jail (even Stalin didn’t think of that one!) – and a substantial, additional direct grant to the BBC World Service.

The BBC certainly preferred the European Union during these last few years, and in Scotland has facilitated a nascent breakaway which could halve the territory of the country whose name it bears and whose money it spends.

If its broadcasters could choose an imagined country to adhere to, it would be Wokeland –achingly politically correct, gender, race and sex obsessed, and seemingly self-hating.

So much so that it has left an aching void which, within weeks, its former politics guru Andrew Neil will seek to fill with his new GB News channel. The threat is significant, and every other day an announcement of broadcasters from Better Days Britain joining it is received enthusiastically on social media if not in the gleaming spires of the BBC.

I mention all of this now – although I have many times before – because I’ve just been through a week in which the British state broadcaster has literally sought to delegitimize me as a candidate for the Scottish Parliament elections next month on the grounds that I am writing for you, here, on RT.

In fact, twice in one night, the BBC (supposedly covering my manifesto launch, dealing with specifically Scottish Parliament matters) began by asking me if I was a “fit and proper person” to STAND for the Scottish Parliament – elections being after all a matter for mere voters – because I work for RT, the “Kremlin-backed television station.”

Some background: I have worked for RT for around a decade, during which I have been elected to and served in the British Parliament at Westminster. No one ever questioned my right to be so. In fact, I have been a Russophile for more than 50 years, nearly 30 of which I spent as a British MP.

On my shows on RT, I have welcomed guests on my sofa like Conservative cabinet ministers Jacob Rees-Mogg and David Davis, former Tory grandees like Peter Lilley, psephology king Professor Sir John Curtice, lords, ladies, generals, knights of the realm, MBEs and OBEs by the dozen, if not the score. And so many privy counsellors, I really couldn’t count them.

But now my very legitimacy as a candidate for office – elected office – becomes THE story, at least when it comes to covering my campaign. On a third occasion last week, the tack slightly changed. Again, on BBC radio, the absurd canard about Vladimir Putin seeking to interfere in the Scottish independence referendum in 2014 was thrown in my face. The sheer illogicality of this charge is astonishing, because at the time the only elected British politician on the books of RT was me, the anti-separatist. We are asked to believe that Putin and the Kremlin so wanted to foment independence for Scotland that they employed me to tour the country successfully defeating the independence cause in the referendum. That Putin, huh? Sometimes he’s so smart and sometimes so dumb.

The absurdity multiplies once you know that exactly the same charges are being made by the same people against Alex Salmond. So, get this – the Kremlin is backing the most prominent separatist Salmond, and the most prominent anti-separatist: me. It’s a two-horse race, and the Kremlin are on both of them, according to the BBC. Neither does the absurdity stop there. My protestations that nobody at RT, nobody in Russia – never mind the Kremlin – has ever interfered in the content of my television work are met with scarcely concealed scorn by the BBC’s media acolytes, the lesser-spotted Russophobes.

And yet, logically, that must be true. If the Kremlin would like to see the break-up of Britain – as Britain tried for eight decades to break up Russia – it is being remarkably tolerant in allowing me so many uncensored opportunities to fight to my last breath against the break-up on its platforms. Certainly, no presenter on the BBC would ever have been allowed to argue against the break-up of Russia on any British television station.

The lucky truth for me is that no voter on the streets of Kilmarnock gives any more of a thought to Vladimir Putin than Mr. Putin thinks of them. The men and women of the south of Scotland have enough problems rather closer to home than the Kremlin to worry about. In fact, when speaking on my show on RT about the 60th anniversary of the great mission of Yuri Gagarin, I’m sure most people’s reaction was to nod in respect and admiration for that great, stellar, achievement.

People in Scotland don’t hate Russia; we even have a street still called Gagarin Way. We’ll see soon enough if they hate Alex Salmond and me. But if they do, it won’t be because we’ve got snow on our boots and are hiding as KGB agents under their beds.