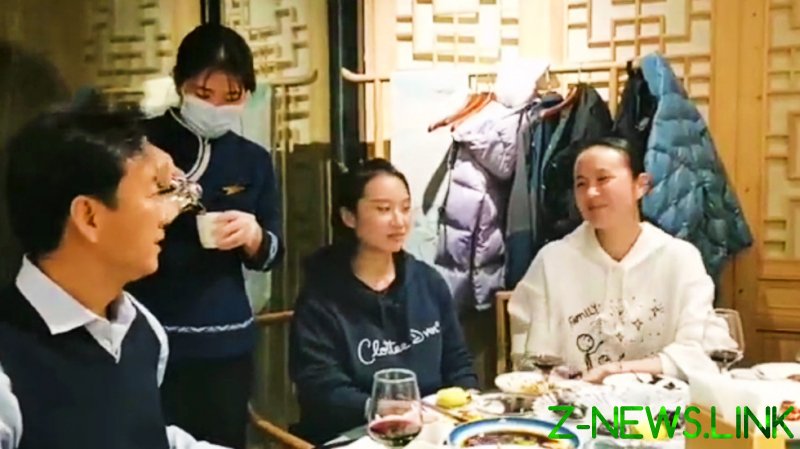 Tennis bosses and human rights campaigners have been pushing for footage to prove that the former doubles champion is safe after she ‘disappeared’ from public view following allegations of sexual abuse she made against the country’s former vice premier.

A ‘message’ from Peng as the campaign gathered momentum was widely considered not to have been written by her, and there was more skepticism when a series of photos of her playing with a cat in a room full of soft toys emerged on Saturday morning.

Hours later, the editor-in-chief of the state-run Global Times newspaper – who also released the photos of Peng – used Twitter to share two clips purportedly showing Peng entering and eating in a Beijing restaurant with her coach and friends.

Curiously, the date on the door of the restaurant was said to show the date of November 20.

The man and one of the women repeatedly reference the date, according to Sky Sports’ translation, which said that the woman corrects him when he asks: “Tomorrow is the 20th of November, right?”

“We had two matches in the past,” he then reportedly says. “But we were not happy with the results.

“The match tomorrow is the conclusion of the nine matches in the past three months. The end of November is the end of the year. We must try our best.”

Unsurprisingly, that has done little to dispel doubts about whether Peng, who appears to have all-but vanished from social media since her post about Chinese Communist Party (CCP) member Zhang Gaoli was removed within half an hour, is acting freely.

“When I eat out with my friends, I always ask that one films while the other talks about today’s date,” mocked one viewer. “Thanks for clearing this up.”

Another joked: “When I go out with my friends, I always record the random date written on the door.”

A cynic chimed in: “Not just record, but linger on it like it’s the point of the video. They are so, so bad at this.”

Governing body the WTA previously said it was worried by the apparently inauthentic nature of the original message supposedly issued by Peng in her first public announcement after the scandal broke.

The organization has threatened to withdraw events from China – its fastest-growing market – unless it is convinced of Peng’s welfare.

World number one Novak Djokovic is the most high-profile name to publicly back the WTA’s stance, and the White House said it was “deeply concerned” by the situation, adding that China “has zero tolerance for criticism and a record of silencing those who speak out.”

Legendary female players including Serena Williams and Billie Jean King have also called for a satisfactory end to the troubling saga.

Responding to the videos, WTA boss Steve Simon said: “I am glad to see the videos released by China state-run media that appear to show Peng Shuai at a restaurant in Beijing.

“While it is positive to see her, it remains unclear if she is free and able to make decisions and take actions on her own, without coercion or external interference.

“This video alone is insufficient. As I have stated from the beginning, I remain concerned about Peng Shuai’s health and safety and that the allegation of sexual assault is being censored and swept under the rug.

“I have been clear about what needs to happen and our relationship with China is at a crossroads.”

One watcher of the videos asked: “Why do these need to be released using state media accounts?

“Can she use her [network] Weibo? Can she travel? Can she speak for herself?”

Another warned: “You know the more videos you release saying ‘all is OK’, the less it looks like all is OK?”