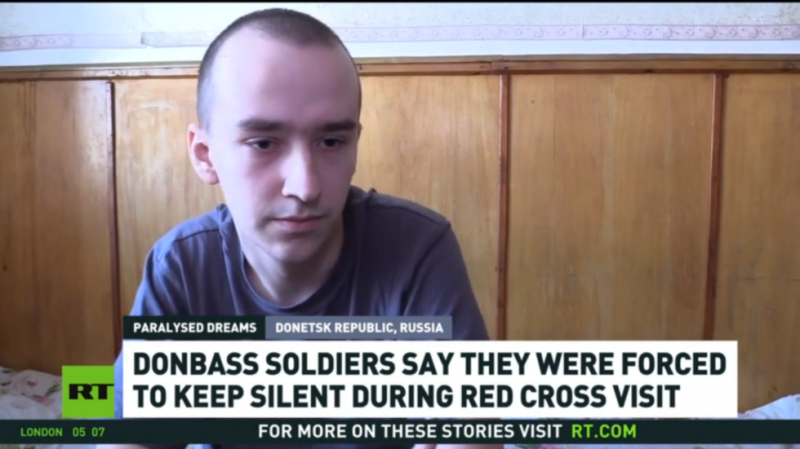 Russian soldiers who were released during a recent prisoner exchange with Kiev have told RT that they were tortured and threatened while in captivity.

They said that they were beaten during interrogations, with one former prisoner claiming that “some were even beaten to death.”

“Those three months were a living hell. I don’t want anyone else to go through that,” a soldier said after he, and other returnees, were flown to Moscow Region for debriefing and medical treatment.

“We were made to walk in the cold for about 16 hours with only shirts, light trousers, and flip-flops on,” another released soldier said.

I saw some guys jailed in Lviv show their legs. They were swollen from beatings. They could be beaten for anything seen as wrong.

Another released soldier said prisoners were forced to learn and sing Ukrainian songs and anthems. “They wouldn’t let us eat until we agreed to sing,” he added.

A serviceman who is now recuperating in Russia’s Donetsk People’s Republic (DPR) told RT that Ukrainian troops had fired an artillery barrage and surrounded his unit when they were stationed near Kharkov in eastern Ukraine.

“First they put us in a hanger. They stripped one of us naked when it was freezing outside,” he said, adding that prisoners were then transferred to Kiev and kept in a basement for over a month.

The officers beat us during interrogations, and just because they felt like it. They really beat me up when they asked me, ‘whose Donetsk is it?’, and I replied that it is, of course, Russian.

Another soldier said he was also held in a hangar near Kharkov where prisoners were “constantly beaten” until a Ukrainian commander arrived. “They beat me on the soles of my feet with combat boots,” he explained.

Some returnees described how they were instructed to lie, so their statements could be used for propaganda purposes. “They told us to say that we were young students taken to the frontlines. But we were volunteers. We went to defend our motherland,” a captive said after being freed.

Another alleged that they were warned not to tell a visiting Red Cross team about the abuse they were being subjected to. The medical charity was inspecting a detention center in the eastern Ukrainian city of Poltava at the time.

“It was impossible to talk confidentially because Ukrainians were sitting behind the wall and could hear everything. And before that, the administration approached us and told us not to tell much, otherwise, we would ‘pay for it,’” he said.

Russia and Ukraine conducted two major prisoner exchanges in the span of a week. Moscow brought back 50 servicemen on Saturday and 107 more on Thursday, according to the country’s Defense Ministry.

Officials in Kiev said that 52 and 107 Ukrainians were released over the same period.