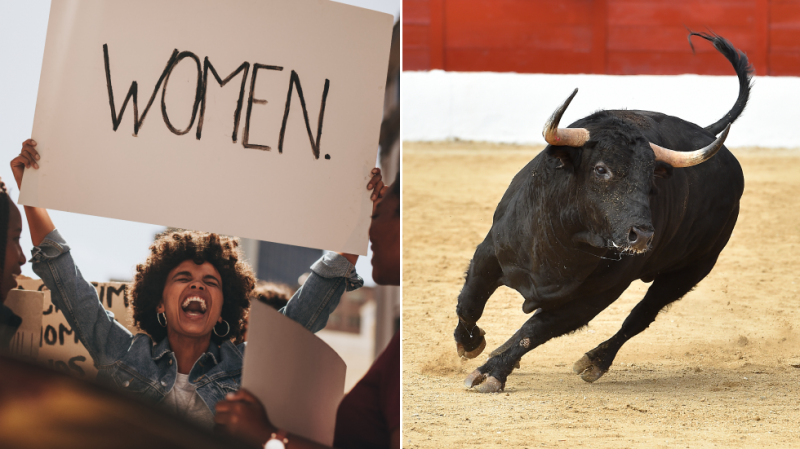 I reckon it must be the single most overpowering thought going through the tiny mind of that huge beast as the bullfighter raises his sword in the air, and aims it down between his shoulder blades and into his furious beating heart.

You know what I mean, right? That tonne of beef has been tormented by a pair of picadors on horseback inside the ring with their little spikes, and some matador bloke in a spangly outfit keeps waving a red rag in front of his face. The phrase ‘like a red rag to a bull’ exists for a reason: These fighting bulls don’t much like rags, red or otherwise, wiggled in their faces.

But, nah, that’s not what’s got the beast so angry. He was mightily p****d off about his name: ‘Feminist’.

In yet more evidence that the New Law of Woke is seeping into every nook and cranny of humanity, every crack and crevice of planet Earth – good luck in the reborn Islamic Emirate of Afghanistan, by the way – the northern Spanish city of Gijon’s mayor has cancelled its bullfighting festival due to organisers “crossing various lines”.

Oh dear, how? Did they set fire to those poor creatures, castrate them or what? Nope. The city’s socialist administration instead took exception to the fact that one of the slain bulls was indeed called ‘Feminist’ and another ‘Nigerian’. Yes, you read that correctly.

I have lived in Spain for many years. It’s my home now, possibly forever. My kids are half-Spanish. But I live in Barcelona, and the Catalan people are only half-Spanish too. Catalonia banned bullfighting a decade ago and one of the main old bullrings in the city just down from the 1992 Olympic stadia is now a tourist attraction of a far more modern and acceptable hue.

So now, in the centre of the ring where bulls and, to be fair, the occasional bullfighter, bled to death are coffee shops and restaurants. Up above in the stalls where the spectators would gather are all the usual high street shops.

Getting rid of the bullfights was as much of a political affair as it was about animal welfare, though; it was seen as part of the culture of Spain, not Catalonia.

And that’s indisputably a fact, as the bulls are celebrated in Spain. Drive along pretty much any main road there, especially on the plains around Madrid and down to the south and into Seville, and you’ll see big metal cutouts of bulls on hills overlooking the road. The Spanish symbol people routinely stick on their cars is the bull (the Catalans, in contrast, opt for the donkey).

As a Brit, I’m obliged to love dogs and cats and animals in general. So I reckoned the bullfighting I had never actually seen myself was barbaric, backward and just plain wrong.

Except one day, I actually sat in a bar up in the hills to the west of Madrid with a load of crusty old country folk as they watched the bullfights on the TV overhead. The idea that it is just a bunch of heathens with a sick bloodlust is simply not the case. A bloke dressed like a dandy doesn’t just leap into the ring and stab a bull with a big sword. There is an art to it, a dance.

The matadors are lauded and celebrated or criticised and lambasted for their technique and the way they move, in a not-too-dissimilar way to a boxer or a UFC fighter or martial artist. Yeah, then the bull gets a sword rammed through its heart. But that’s not why these old fellas were sitting in a bar watching the spectacle beamed in from a bigger town. The death was the end of it – the orgasm. Before that, there is an awful lot of foreplay.

One old guy explained to me how the bulls in Spain are extra special; they’re the best cattle in the whole world, and absolutely adored there – probably more so than the matadors who kill them. The bulls’ genetic line can be traced right back to the time of the Roman gladiators. These are not cattle raised for slaughter, they’re bred and treated and fed like the prizefighters that they truly are. They live freely on big estates and rarely encounter humans until they charge into the ring at the age of six or so.

“What they gonna do with them when they finally ban it everywhere?” the old dude said, then sucked on his cigarette (smoking was banned there, even then, although none of the smokers nor bar staff seemed to think this was an issue). He pointed the lit end at the TV. “You want one of these guys as a pet?”

The bullfighting spectacle generated enough material for Ernest Hemingway to write one of his greatest books in 1932 called ‘Death In The Afternoon.’

I very much doubt Hemingway’s classic reflection on life and death reflected through the bullfights would have any impact on the local socialist party that runs Gijon these days. They had already decided to get shot of the 133-year-old Begona bullfighting festival, saying the locals were no longer fans. But the plans were accelerated when Mayor Gonzalez claimed that ‘Feminist’ and ‘Nigerian’ showed that bullfighting was being “used to display an ideology contrary to human rights”.

Bullfight lovers argue that the problem is actually just an issue caused by people ignorant about how bulls are named. The Union de Criadores de Toros de Lidia, which represents 345 breeders, said the names are set by ministry of agriculture regulations that ensure the bloodline of a bull can be traced. Bulls are given the names of their mothers. These particular bulls, said the union, “descended from the cows ‘Feminist’ and ‘Nigerian’, both acquired by the rancher in 1986, with a lineage of more than 35 years and more than four generations, far from any social and political context.”

The decision to ban the festival, of course, was welcomed by many animal rights campaigners as well as opposition parties. Journalist Anita Botwin posted an ironic tweet: “That a feminist bull put an end to the bullfighting festival in Gijon is poetic justice.”

So the contract with festival organisers is not being extended, meaning a loss of €50,000 ($58,000) a year for the city. Oh well, I guess they can always turn the arena into a shopping mall.