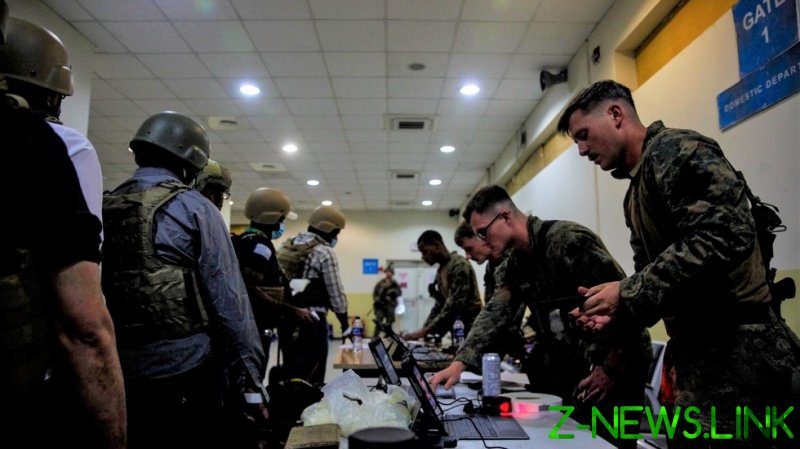 US citizens, legal permanent residents and their children “should consider travelling to Hamid Karzai International Airport,” the US Embassy in Afghanistan – currently operating out of makeshift offices at the airport – said in a security alert posted on its website on Wednesday. The embassy provided instructions as to how to get to the airport, but noted that the access point “may change frequently” and said it would “provide updates as necessary.”

The US government “cannot ensure safe passage” to the airport, the embassy then noted in big bold letters.

“Please be advised that a significant number of individuals have registered and space on these flights is available on a first come, first serve basis,” the alert added. “You may be required to wait at the airport for a significant amount of time until space is available.”

Americans seeking to leave were told to fill out forms “as soon as possible” but “only once,” even if they previously submitted their information to the embassy, as the form “is the only way to communicate interest in flight options.”

“Do not call the US Embassy in Kabul for details or updates about the flight,” the note added. “Do not travel to the airport until you have been informed by email that departure options exist.” How exactly people are supposed to rely on emails in a war zone, or whether emails could keep pace with the rapidly changing situation on the ground, went unexplained.

Those fortunate enough to send in the required paperwork, get emails, make it to the airport somehow, and get a seat on a plane, can only bring “one piece of hand luggage” per person, “if space is available.” There is no room for pets, the embassy said.

With the complete collapse of the US-backed Afghan government on Sunday, which seems to have caught Washington off guard, the Taliban now controls almost all of Afghanistan. There are several thousand US troops at the Hamid Karzai International Airport (HKIA) in Kabul, which is surrounded by the Taliban.

US Defense Secretary Lloyd Austin admitted to reporters at the Pentagon on Wednesday that the priority for the troops is to defend the airport, adding that allowing thousands of civilians to breach the perimeter would put those forces at risk.

“We don’t have the capability to go out and collect large numbers of people,” he told reporters, rejecting the idea of sending troops to gather Americans into convoys that could then make their way to the airport. The Taliban has been letting through the people who have the right documents, Austin added.

Up to 10,000 Americans may still be in the country, waiting to be evacuated along with many more Afghans seeking to flee. Hundreds of Afghans mobbed US C-17 transport planes bringing troops in over the weekend. One flight departed with 640 people crammed inside. Others clung onto the outside of the planes, dying when they got trapped in the landing gear or plummeting to the ground below.