Home / WORLD / FDR’s Second Coming? Biden’s vision of America’s future is straight out of the 1930s

FDR’s Second Coming? Biden’s vision of America’s future is straight out of the 1930s 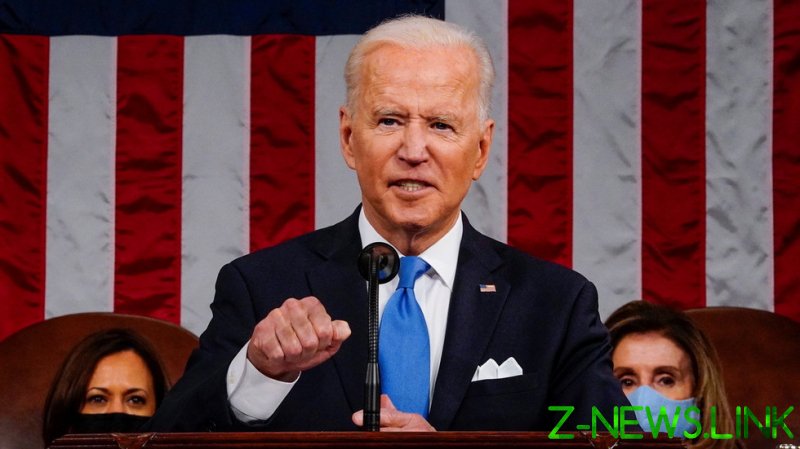 Wednesday night’s speech to the joint session of Congress was uncharacteristically long for Biden, clocking in at over an hour. However, it was very much his speech, including occasional shouting and emotional manipulation woven throughout. Someone’s cell phone rang at one point, echoing around the mostly empty chamber. Only 200 or so lawmakers and guests were in attendance, ostensibly on account of Covid-19 protocols still in effect.

The White House actually released a transcript of it soon after Biden began speaking, no doubt to the delight of corporate journalists eager to promote its talking points. True to form, again, Biden only went off-script a couple times – such as when he spoke on gun control, repeating the infamous “no amendment is absolute” line and claiming that “We’re not changing the Constitution, we’re being reasonable.”

In Biden’s view, however, “reasonable” is whatever he and the Democrats propose, with Republicans and the rest of America having no other choice but to fall in line. It sounded much like his Covid-19 speech back in March: carrot and stick.

The same man who on January 22 said “there’s nothing we can do to change the trajectory of the pandemic in the next several months” now took credit for 220 million vaccinations and a drop in infections – as well as economic recovery driven by the very states he condemned as “Neanderthal” when they announced reopening against his advice and that of Dr. Anthony Fauci.

Biden only spent a little while looking back on his first 100 days in office, however – most of the speech was a vision of where he wants to go next. And that can be best described with a variation on the American wedding rhyme: something old, something new, something borrowed and everything Blue.

His American Jobs Plan would see the government putting millions to work in “green” and infrastructure projects – an echo of the failed Obama-era “shovel-ready” recovery only more ambitious – while the American Families Plan would expand socialized education, healthcare and child care. How does his administration intend to pay for it? By making the corporations “pay their fair share” of taxes, straight out of the Bernie Sanders playbook. The very same corporations that backed his election, and funded him for decades as a senator representing Delaware, a corporate tax shelter state? Shh, one isn’t supposed to notice these things!

In addition to ‘Buy American’ economic populism that looked very much plagiarized from his predecessor Donald Trump – just given a fresh coat of “green” paint – Biden also called for traditional Democrat policy priorities, from amnesty for illegal immigrants to gun control. There were also some new ones, however – such as gender and racial “equity,” and police reforms in the name of George Floyd.

While climate change was mentioned in passing, Biden did show his commitment to the environment by recycling parts of his Afghanistan withdrawal speech and Secretary of State Antony Blinken’s foreign policy address. He even tried to argue that withdrawal from Afghanistan was needed because the most dangerous terrorism threat was from “white supremacy” at home.

In a snippet released in advance of the speech, he also described the “insurrection” on January 6 as “the worst attack on our democracy since the Civil War.”

While many people took issue with this, invoking things like 9/11 or the 1983 bomb attack on the Senate, their criticism missed the point. All of those things were attacks on the American constitutional republic, whereas Biden’s speech was clearly referring to Our Democracy.

This particular phrase, which has crept into Washington-speak over the past couple of years, represents the entity that I have argued has replaced the old republic entirely by now. The January 6 riot at the US Capitol was merely the convenient excuse for Democrats to apply the finishing blow – purging Trump from social media and ensuring that Republicans can never be more than a token opposition.

At one point, Biden said he wanted to take the US “on our way forward to a Union more perfect. More prosperous. More just. As one people. One nation. One America.”

It’s not quite Hitler’s “one land, one people, one leader,” but it rhymes. Biden himself invoked the 1930s, calling it “another era when our democracy was tested” and quoting the motto of Franklin Delano Roosevelt’s National Recovery Administration, “We do our part.”

This is the same NRA that actually wrote “The Fascist Principles are very similar to those we have been evolving here in America,” in one of its reports back during the New Deal, as pointed out by German scholar Wolfgang Schivelbusch in a 2006 book.

Analysts who still operate in the traditional framework of American politics will no doubt parse Biden’s speech as a return to “normal” so rudely disrupted by the Orange Usurper. Between his endorsement of HR1 and his party’s push for DC statehood, packing the Supreme Court and willingness to use government power to persecute political opponents, however… I think Biden and his party intend to turn the clock back to the 1930s instead – and just like with FDR back then, there’s no one left to stop them.