Home / business / Fatal PE in Russia: doctors left on the floor suddenly fell in the hallway of the patient

Fatal PE in Russia: doctors left on the floor suddenly fell in the hallway of the patient 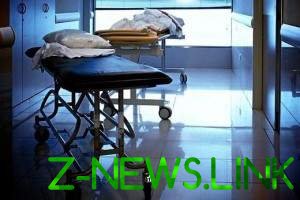 In the Clinical emergency hospital in Smolensk the doctors about half an hour did not render aid to a patient fell in the hallway and repeatedly banged his head, trying to get up.

The video surveillance shows a man coming out of the doctor’s office, falls to the floor and hits his head. The nurse looks at him and goes to another room. Within 10 minutes the patient no one is paying attention. Then it is approached by three people (probably, the doctor and nurses) and being dragged by his feet, with floor is a trail of blood. Then they leave, and the patient remains lying on the floor.

The recording was made in the night of 12 June 2017. Readovka.ru reports that the patient fell into a coma, nine days later he had a craniotomy, and two days later he died.

According to Readovka.ru the man was in the hospital after I got hit with brass knuckles to the head in a fight near the restaurant.

Chief physician of Clinical hospital of emergency medical care Vladimir Zhuravlev in the comment to the channel “360” stated that the patient was taken to the hospital in a state of alcoholic intoxication. According to the doctor, the man behaved aggressively.

“He was admitted to the ward observations, and in this moment came out of the house and fell in the hallway. Was approached by a nurse who cannot lift the patient, as he weighed over 100 kilograms,” — said Zhuravlev.

The physician claims that the patient was subjected to “all methods of examination, the diagnosis was established on time, the treatment was carried out adequately.”

According to Zhuravleva, published a video “does not match the whole picture.” “We now can’t be justified, because the capabilities of the server are not allowed to preserve the entire video,” said the doctor.