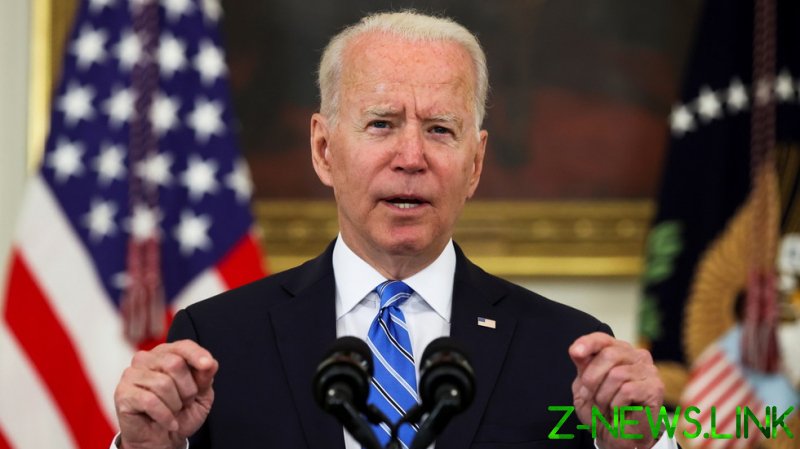 “I meant precisely what I said,” Biden told reporters on Monday, asked about his words outside the White House on Friday, going on to explain that what he really meant was that a dozen people out there were responsible for 65% of “misinformation” on the platform, based on the article he read.

“Facebook isn’t killing people,” Biden said. “These 12 people are out there giving misinformation, anyone listening to it is getting hurt by it. It’s killing people. It’s bad information.”

“My hope is that Facebook, instead of taking it personally…that they would do something about the outrageous misinformation about the vaccine, that’s what I mean,” he added.

Asked about the claims by the White House press secretary Jen Psaki – about misinformation on Facebook – on Friday, as he was departing for Camp David by helicopter, Biden just said “they’re killing people.”

Mark Zuckerberg’s behemoth was quick to protest, insisting it wasn’t their fault Biden wasn’t meeting his ambitious vaccination goals, and citing facts and figures to show that 85% of its users were pro-vaccine. Facebook has also deployed “unprecedented resources” to crack down on information not approved by the World Health Organization (WHO) or local governments, hiding 167 million pieces of content deemed untrue by fact-checkers and erasing 18 million instances of “Covid-19 misinformation,” said VP of Integrity Guy Rosen.

That clearly wasn’t enough for the White House press corps, who asked Biden if Facebook had done anything more over the weekend, and if he intends to hold them accountable if they don’t.

“To be completely honest with you, I don’t know that they did anything today, up to over the weekend, I don’t think they had. But I don’t know,” the president responded. All he’s trying to do, he added, was “make people look at themselves…look in the mirror.”

CNN’s Oliver Darcy, an outspoken advocate for social media censorship, described Biden’s comments as “quite a walk back.”

This creates an “awkward position” for commentators who went after Facebook “emboldened by the president’s initial words,” said NBC’s Dylan Byers.

The Biden administration’s crusade against online ‘misinformation’ was launched last Thursday, when the US Surgeon General Vivek Murthy declared it “an imminent and insidious threat to our nation’s health” and claimed that 67% of unvaccinated Americans had heard at least one “myth” about Covid-19 vaccines.

Psaki doubled down on Friday, saying that people banned on one platform should be banned on all of them, while dodging questions about defining misinformation and concerns about the First Amendment and freedom of speech.

As to the article Biden was referring to, it appears to have been produced by the UK-based Center for Countering Digital Hate (CCDH), a nonprofit activist group that was involved in the June 2020 attempt by NBC to pressure Google into demonetizing the blog ZeroHedge and the conservative-leaning online magazine Federalist.