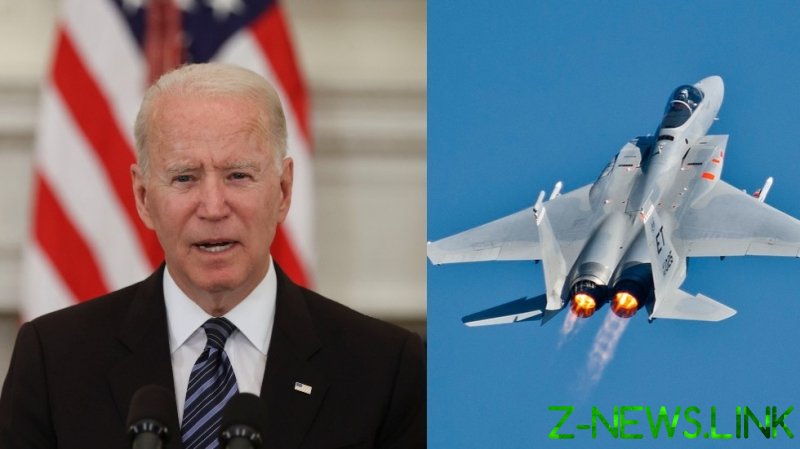 “Those who say the blood of patriots y’know and all the stuff about how we’re going to have to move against the government. Well the tree of liberty is not watered with the blood of patriots,” Biden said on Wednesday, announcing new gun control actions from the White House. “What’s happened is, that there never been, if you wanted, you think you need to have weapons to take on the government, you need F-15s and maybe some nuclear weapons,” he continued.

Biden was presumably referring to the quote by Thomas Jefferson, author of the Declaration of Independence and the third US president, who famously wrote in 1787 that “the tree of liberty must be refreshed from time to time with the blood of patriots & tyrants,” in response to the recently quashed Shays’ Rebellion.

The current president argued that the “Second amendment from the day it was passed limited the type of people who could own a gun and the type of weapon you could own,” such as cannons. The amendment itself contains no such provision, however, and merely says that “the right of the people to keep and bear Arms, shall not be infringed.”

Biden’s bizarre claim that the US government – or rather, the military at its disposal – could only be countered by fighter jets and maybe nuclear weapons was quickly challenged online by people pointing out that the Afghans and the Vietnamese seemed to have managed just fine without.

Another group of critics noted that Biden’s words directly contradict his own narrative about the January 6 riot at the US Capitol – when protesters disrupted the joint session of Congress that sought to certify his election – as an “insurrection” that threatened the very survival of “our democracy.”

Biden’s argument about the US government having nuclear weapons wasn’t even original – Congressman Eric Swalwell (D-California) famously made the same claim in November 2018, as part of his proposal for a “mandatory buyback” i.e. confiscation of weapons. Swalwell’s presidential bid crashed and burned, but his fellow Democrat currently in the White House seems to have picked up the torch.

It wasn’t the only thing Biden “recycled,” either. The part about deer wearing Kevlar vests was taken from his address to Congress at the end of April, while “we’re not changing the constitution, we’re enforcing it,” was taken from his remarks announcing executive orders against “ghost guns” earlier that month – better remembered for his claim that “no amendment to the Constitution is absolute.”

The White House has reluctantly admitted that shootings and homicides across the US have drastically increased, but blamed “summer” and lack of job opportunities rather than local prosecutors and police refusing to enforce the law in many cities in the name of “racial justice” and “equity.”

Instead of cracking down on violent offenders or enforcing strict gun control laws in Democrat-run cities, the administration is going after “merchants of death,” blaming “rogue gun dealers” for the proliferation of illegal weapons on the streets.

Biden’s other proposed measures involve “community policing” investing in social programs such as “community violence interventions,” and expanding “summer programming and employment opportunities” – even as unemployment in the country remains at record-high levels after the Covid-19 pandemic.

The part about giving teenagers jobs so they’d be too busy to resort to violent crime appears to echo the infamous 2015 argument by State Department spokesperson Marie Harf that the US “cannot kill our way out” of the war against Islamic State (IS, formerly ISIS) terrorists, should address “root causes” of terrorism such as “a lack of opportunity for jobs.”