Home / WORLD / Ex-spies (and proven liars) ‘deeply suspicious’ of Russian involvement, based on ZERO EVIDENCE, so hush up about Hunter Biden

Ex-spies (and proven liars) ‘deeply suspicious’ of Russian involvement, based on ZERO EVIDENCE, so hush up about Hunter Biden 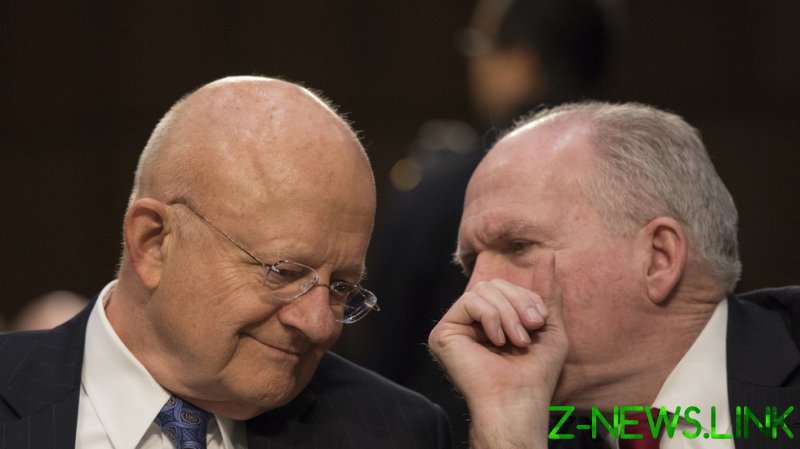 Never mind the undenied fact that reports about the Biden crime family’s influence-peddling business are based on the actual emails of Biden’s son, Hunter. Never mind that the revelations aren’t only about Hunter Biden.

Democrat presidential candidate Joe Biden is allegedly the heavily compensated “big guy” at the top, and it stands to reason that his high office made it possible to extract millions of dollars from foreign entities. Ukrainian energy companies don’t normally go looking for crack addicts who know nothing about energy and nothing about Ukraine to fill cushy, no-show jobs that pay upward of $50,000 a month.

But never mind all that. And never mind that the Biden revelations are based on more than the emails that were obtained from Hunter Biden’s laptop at a Delaware repair shop. Hunter’s jailed former business partner, Bevan Cooney, gave Breitbart News access to 26,000 emails that revealed more dirt, including emails apparently showing how meetings were set up for Chinese investors and Communist Party officials with then-Vice President Joe Biden.

Also never mind that Director of National Intelligence John Ratcliffe said Monday in a Fox Business interview that there is no evidence or basis for the likes of US Representative Adam Schiff (D-California) to say the Biden scandal is part of a “Russian disinformation campaign.” He added that US intelligence officials don’t believe there is a Russian connection “because there is no intelligence that supports that, and we have shared no intelligence with Adam Schiff of any member of Congress.”

But forget all the apparent facts because it turns out that more than 50 former intelligence officials signed a letter Monday saying that despite not having “any evidence,” they think the Biden emails have “all the classic earmarks of a Russian information operation.” The former government workers said they don’t know if the emails are genuine – “just that our experience makes us deeply suspicious that the Russian government played a significant role in the case.”

And after speculating about the Kremlin’s motivation and ability to undertake such an operation, the former officials said, “It is high time that Russia stops interfering in our democracy.”

A gaggle of proven liars who bear at least some of the blame for four years of Russia hoaxing against President Donald Trump and the American people now beseech us to trust them, without evidence, and dismiss the Biden story as a Russian plot.

Another liar who apparently has an invisible force field against perjury charges is former CIA director John Brennan, who fibbed to Congress about the Steele dossier. Like the other Russia haters who signed the letter, Brennan wants us to trust his instincts on this one.

These guys are part of the circle of protectors shielding Biden’s campaign from being confronted with any revealing questions. There’s Big Tech, which suppressed distribution of the New York Post’s Biden scoops. There’s the mainstream media, which did a combination of pretending nothing happened and suggesting that it was a Russian conspiracy. And there’s the unelected Deep Staters who feed the machine excuses for censoring reality from reaching too many American voters.

The circle of defenders even has interconnections. Hayden and Clapper are CNN contributors, while Brennan is a contributor for MSNBC and NBC.

Think about all the mental gymnastics we must go through to buy the theory of the former spooks. The emails from Hunter Biden’s hard drive have to have been fabricated, even though that hasn’t even been alleged, and the repair shop owner and Trump lawyer Rudy Giuliani and various media outlets must be Russian agents or unwitting dupes. Or maybe it’s not really Biden’s hard drive, even though that also hasn’t been alleged and Biden’s lawyers have reportedly asked for it to be returned to him from the repair shop. And Cooney, the former business partner who turned over his personal trove of emails, well, he must be a Russian agent, too.

Regardless of all that, we don’t even have to allow for the possibility that the reports are true. They must be censored. “Russia did it” is the get-out-of-jail-free card for any Democrat in trouble, and it must be honored in all cases.

And as absurd as it all is, it keeps working because the circle of unaccountable defenders is never compromised. It’s a measure of how broken the US political and media systems are that just as in the case of the Democratic National Committee emails that were leaked in 2016, the revelations are never confronted. Just say Russia was behind it, and the substance of what’s revealed never needs to be considered.

The Commission on Presidential Debates is lending a helping hand, keeping foreign policy off the list of topics for Thursday’s final debate between Trump and Biden before the election. The commission also changed its rules to mute candidates’ microphones while their rival speaks uninterrupted for two minutes at the beginning of six topic segments. Both decisions will help to minimize how much viewers get to hear about Biden’s overseas influence peddling.

Never mind the evidence. Nothing to look at here. And never mind national security. If current and former government officials want to figuratively lob Molotov cocktails, over and over, at the nation’s chief nuclear rival – based on nothing but hunches and self-serving conjecture – flames away.

Falsely antagonizing a geopolitical rival and damaging relations between the countries to further political and personal agendas isn’t a punishable offense in today’s America.