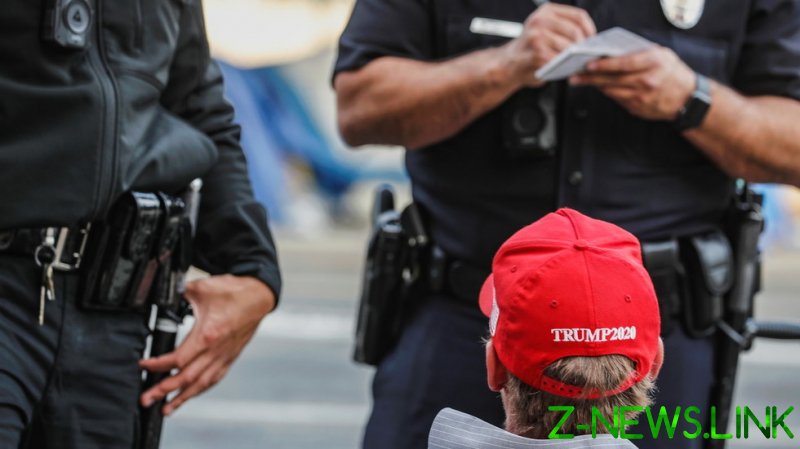 On Sunday, Hayden retweeted a post suggesting sending “MAGA-wearing unvaxxed” Americans to Afghanistan rather than sending the evacuation planes “back empty” after they deposited those fleeing the Taliban elsewhere, calling it a “good idea.”

The General also retweeted an image of pickup trucks with Trump flags stretching over a road as far as the eye could see, reminiscent of similar images of identical Toyota pickups driven by ISIS. Ironically, those trucks were also likely American in origin. ISIS is also, notably, not the Taliban.

The former intelligence chief also posted a photoshopped image of the child from the Sixth Sense film inside a car surrounded by anti-vaccine protesters, the caption reading “I see soon-to-be-dead people” – a threat or a sardonic observation, depending on how one reads it.

Hayden’s retweet spree appears to be part of a growing effort among national security bigwigs to bring the “War on Terror” home – an effort that is sure to escalate now that the war in Afghanistan is, at least in theory, over.

With anti-terror dollars burning holes in their pockets and a presidential administration still doggedly insisting that January 6 was an armed insurrection that came a hair’s breadth from overthrowing American democracy, the national security apparatus is no doubt going to continue inflating the threat of “Vanilla ISIS” – a cringe-inducing mash-up between the rapper of ‘Ice Ice Baby’ fame and the terror group – used by some observers to describe white Trump supporters, until ordinary Americans, too, fear the terrorists next door.

While the DHS admitted there were “no credible or imminent threats identified,” that didn’t stop them from wielding the empty threat like a bludgeon, as visions of their French, Italian, and British counterparts being swarmed by ordinary protesting citizens no doubt has their American counterparts quaking in their combat boots.

The most recent group of generals to take office at the Pentagon under Biden haven’t gotten their communications channels straight, apparently, as Press Secretary John Kirby acknowledged he was “not familiar” with the US Embassy’s warning not to travel to the Kabul airport.

The Biden administration and its allies in the Democratic Party have also been working hard to conflate so-called “anti-vaxxers” with other forms of “home-grown extremists,” calling for Facebook and other social networks to remove their accounts and – in some cases – even suggesting exceptions be made in the First Amendment for criminalizing their speech. One bill proposed by Senate Democrats insists social media platforms should be held liable for their “failure” to remove “health and vaccine-related misinformation during public health emergencies.”

The bill was proposed by Senators Amy Klobuchar (D-Minnesota) and Ben Ray Lujan (D-New Mexico) last month shortly after it became publicly known that the Biden administration was openly asking Facebook and other social networks to remove certain posts.

Editorials in mainstream publications have repeatedly compared the vaccine-hesitant to terrorists, and cities like New York and San Francisco have taken matters even further, barring the non-vaccinated from entering most places of business.

And indeed, further incursions on the rights of the unvaccinated would be right up Hayden’s alley. He described the constitutional protections guaranteed by the Fourth Amendment – which prohibits unreasonable search and seizure – as having changed following the September 11 terror attacks, infamously explaining in a speech several years later that the NSA “doesn’t just listen to bad people. NSA listens to interesting people. People who are communicating information.”

Or, dare he say it…“mis”information?