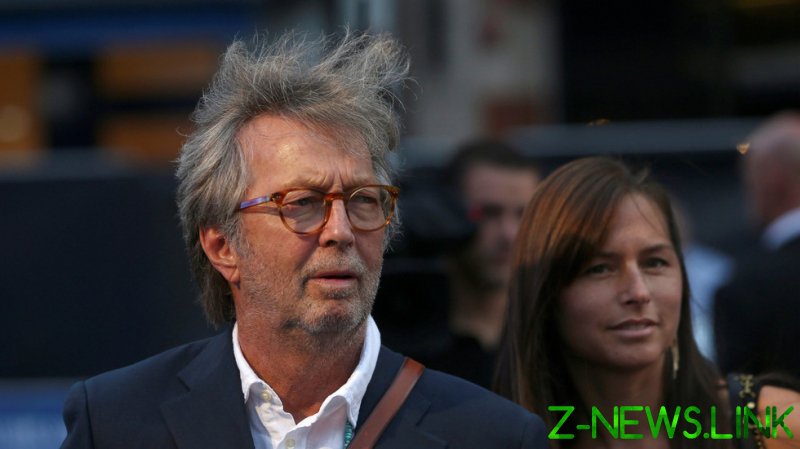 Clapton has made his views on Covid-19 shutdowns and vaccine mandates quite clear since the pandemic began last year. The ‘Layla’ singer has released music critical of government lockdowns, refused to play venues that require vaccinations, and even claimed to have suffered side-effects after he said he was pressured into getting inoculated.

Clapton’s anti-vaxx views have earned him plenty of backlash on social media. Outrage was renewed this week, however, after Rolling Stone published a report claiming Clapton is not only supporting “nonsense,” but also helping to fund it through support for Jam for Freedom, a group of UK musicians who tour and play free shows, often playing music critical of mandates and government restrictions.

The group’s founder, Cambel McLaughlin, revealed that Clapton sent a £1,000 (US $1,300) donation through a GoFundMe account. After McLaughlin reached out, Clapton told him he was doing “great work,” gave more money (McLaughlin would not reveal how much), offered a free van to the musicians, and even promised to possibly join them for some gigs.

McLaughlin, who describes himself as “pro-medical choice,” said he was arrested at a show for breaking Covid regulations and he and his fellow musicians are often stopped and questioned by police.

In May, McLaughlin’s group thanked Clapton for his support on Instagram, promising to “continue your legacy of live music.” Clapton has said in the past that vaccine mandates and government shutdowns are a major threat to the future of live music and musicians who rely on such gigs to make a living.

The Rolling Stone’s lengthy report runs through various controversies from Clapton’s past, as well as the embrace he’s surprisingly received from conservatives. He has been touring through various red states and was even recently pictured backstage at a show with Republican Texas Gov. Greg Abbott, a vocal critic of vaccine mandates. Clapton refused to comment on the claims he has helped fund Jam for Freedom.

Critics have not seen Clapton’s Jam for Freedom assistance as one older musician helping out younger artists, but rather as proof that Clapton is using money and influence to spread vaccine skepticism.

Clapton, however, has also found support. Some pushed back against the Rolling Stone report and chalked it up to a “hit-piece” trying to “smear” and “discredit” Clapton by digging up past controversies and trying to exaggerate his “bankrolling” status among the anti-vaccine mandate crowd.