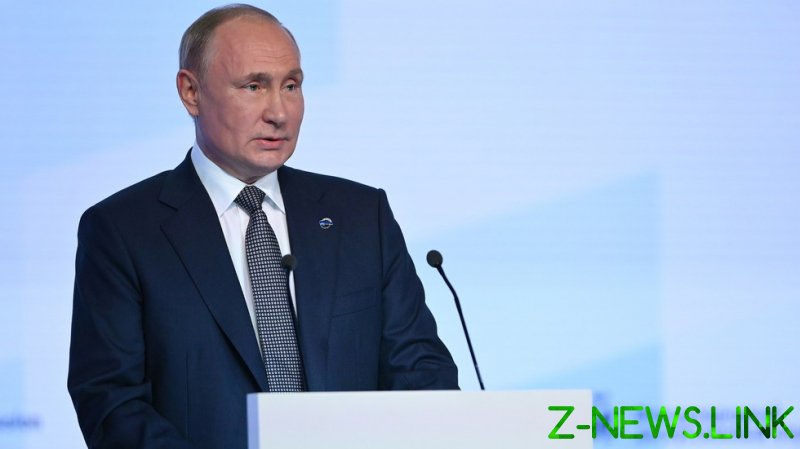 Putin spoke at length at the plenary session of the Valdai Club in Sochi on Thursday, taking questions from the moderator as well as the audience, both those physically present and over video link.

The Russian leader noted the trip by US Defense Secretary Lloyd Austin to Ukraine earlier in the week, saying it could “open the door” for Kiev to join NATO, which “really poses a threat to the Russian Federation.”

Tomorrow, rockets could appear near Kharkov, what are we going to do about it? It’s not us placing our missiles there, it’s them shoving theirs under our nose

Those who broke Afghanistan should help it heal

Normalizing the situation in Afghanistan requires helping the country rebuild, the Russian president said. While Russia, China and other countries of the Shanghai Cooperation Organization – who have pledged aid to Kabul – will do their part, “the main responsibility for what happens there is borne by those countries that fought there 20 years,” meaning the US and its NATO allies.

“The first thing they should have done, in my opinion, is to unfreeze Afghan assets and enable Afghanistan to solve social and economic problems of primary importance,” Putin added, referring to gold reserves and bank accounts that have effectively been confiscated by the US.

‘Monstrous’ newspeak about gender in the West

“Those who risk saying that men and women still exist, and that this is a biological fact, are virtually ostracized” in the West, Putin said, calling the situation “a total phantasmagoria.”

“This is not to mention things that are simply monstrous,” he added, “like when children are taught from an early age that a boy can easily become a girl and vice versa. In fact, they are indoctrinating them into the alleged choices that are supposedly available to everyone – removing parents from the equation and forcing the child to make decisions that can ruin their lives.”

He added that the situation reminded him of the ‘newspeak’ invented by “Soviet culture-warriors” in the 1920s, in hopes of redefining people’s values and creating a new sense of consciousness.

Another Western practice that reminded Putin of the early Soviet days was the push for “social justice” through affirmative action and cancel culture.

“The fight against racism is a necessary and noble cause, but in the modern ‘cancel culture’ it turns into reverse discrimination, reverse racism,” Putin said. “We see with bemusement the process unfolding in countries that have grown accustomed to viewing themselves as flagships of progress.”

What ‘conservatism’ means in Russia

No to revisionism of World War II

Putin said the West seems determined to erase from history the fact it was the Red Army that stormed Berlin in 1945, not the British or the Americans. Nor were they the only ones trying to revise the outcome of that conflict – Turkish President Recep Tayyip Erdogan argued that “the fate of humanity should not be left to the mercy of a handful of countries that won World War II,” earlier this week during a speech in Angola.

“If we remove the veto right of the permanent members, the UN would die the very same day – it would turn into the League of Nations. It would simply become a discussion platform, the Valdai Club 2.0,” Putin said.

Inequality and the crisis of capitalism

That is not to say the world is not in a crisis. According to Putin, there is a “growing inequality of material benefits and of opportunities within society” in some of the world’s wealthiest countries.

“Everyone says that the existing model of capitalism, which is now the basis of the social order in the vast majority of countries, has run out of steam,” Putin said. “There is no longer any way out of the tangle of more and more confusing contradictions.”

Freedom of speech and Russia’s response to Western censorship

YouTube’s decision to close two channels of RT DE in Germany was a “mistake” and merits a response, but the Russian president suggested the situation could be sorted out without resorting to reprisals that would cause even more damage.

“Of course, they infringe on freedom of speech – this is bad,” he told RT’s editor-in-chief Margarita Simonyan. “As far as a response is concerned, we have to be careful,” he added, “Reciprocal measures should not be counterproductive.”