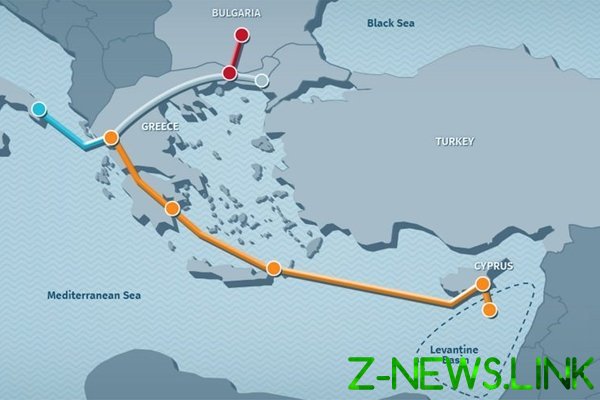 In Athens officially signed the intergovernmental agreement on the construction of the EastMed pipeline. Signatures under the document were put by representatives of Greece, Israel and Cyprus. Later, the agreement will also assure Italy, but exactly when is still unknown.

EastMed will connect Greece, Cyprus and Israel with the South of Europe. Its length will amount to 1.9 thousand kilometers, the investment in its construction is estimated at 6 billion euros. Design capacity – 10 billion cubic meters of gas annually.

The pipeline will pass through the Israeli field “Leviathan” and the Cyprus “Aphrodite”. The project is supported by the European Union, on detailed investigation, the EU has allocated 34.5 million euros. According to the designers, the pipeline can make in the years 2024-2025.

EastMed will force “Gazprom” to fight for market share

The situation was commented to the Agency RIA Novosti senior group Director for natural resources and commodities, Fitch Dmitry marinchenko.

“The gas market in southern Europe is becoming increasingly competitive — Israeli gas, which in the future will be supplied by EastMed pipeline will compete with Russian gas (including going on “Turkish stream”) and Azerbaijan (draft TAP-TANAP), Algerian and LNG,” said marinchenko.

“EastMed, with the recently launched TAP-TANAP, albeit to a small extent, but reduces the EU’s dependence on Russian gas, and consumers potentially means as close to market prices,” he added.

Specifically for Gazprom, said marinchenko, it means that market share will need to continue to fight, and to show flexibility in relation to prices, pricing mechanism and other conditions. “Moscow’s position regarding the extension of transit through Ukraine is also an important point in this competition because it increases the credibility of Gazprom as a “reliable supplier”,” to conclude the expert.