Director brad Peyton, to arrange a local Apocalypse in the film-accident “Fault San Andreas fault”, is preparing the next destruction on the screen. Only this time to destroy the city is not mother nature.

Peyton filmed a classic video game 80s called Rampage or Fury, where you had to break, to smash and sweep away everything in its path, controlling giant monsters. Curious, isn’t it? Godzilla approves. Russian movie apparently will be named simply “Rempeydzh”. It’s like “skyline” and “interstellar” only “Rempeydzh”.

Primatologist Davis Okoye prefers to stay away from people and is friends with George, a surprisingly smart alpha male — gorilla, whom he raised from birth. But the out-of-control genetic experiment turns obedient monkey in a furious monster. Moreover, soon discovered that there are other modified predators. While the newly-created monster’s turn in the ruins of North America, erasing from the face of the Earth everything that comes in their way, Ocoee together with the disgraced genetic engineer tries to invent the antidote, breaking through the endless field of battle, not only to prevent a global catastrophe, but to save fearless creature that was once his friend.

We have the first footage from the film, where you can appreciate the rugged look of the Rock, destruction and all around skill of the heroine Naomi Harris as not to dirty clothes even during such disasters. By the way, from day to day and promise a trailer, it will make the picture more complete picture.

Russian premiere is scheduled for 19 April 2018. 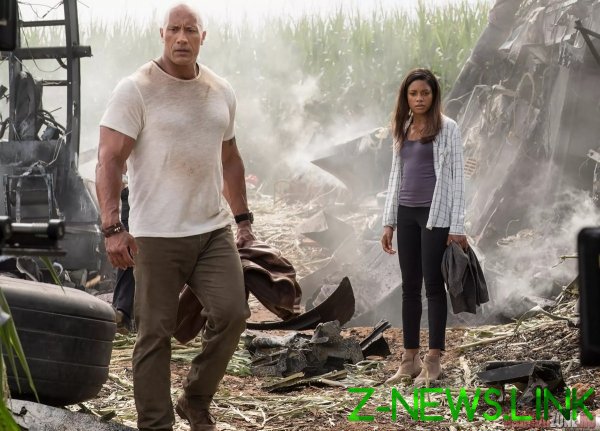