Home / Incident / Drunk Kiev threw himself under the wheels of Mazda

Drunk Kiev threw himself under the wheels of Mazda 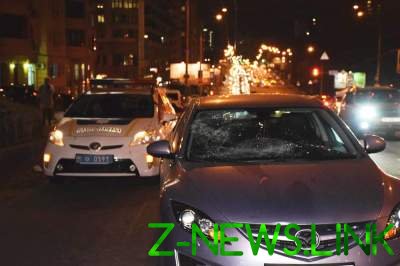 The incident occurred in the city center.

On Tuesday, November 14, on the street opposite to the house №29 in Kiev was an accident. The Mazda collided with a man running across the road.

Arrived at the scene of the collision, police said that 52-year-old man did it in the wrong place. After the incident, Mazda have much broken glass, asphalt in the blood. It is reported by the Informant from the scene of the accident.

The witnesses of the accident I assure you: the man just ran, and almost deliberately threw himself under the car. The victim immediately took the Ambulance. According to preliminary data, he has a traumatic brain injury. Physicians who picked up a man saying that it tasted of alcohol. They have almost no doubt that he was drunk.

Driving a “Japanese” it is suspected the girl. She flatly refuses to comment on the situation. Now next to her is a young man.

Read also: accident in Kiev: the bus knocked down a woman

At the scene working patrol. It is expected the arrival of investigators. Traffic is backing up on one of the lanes on the street.