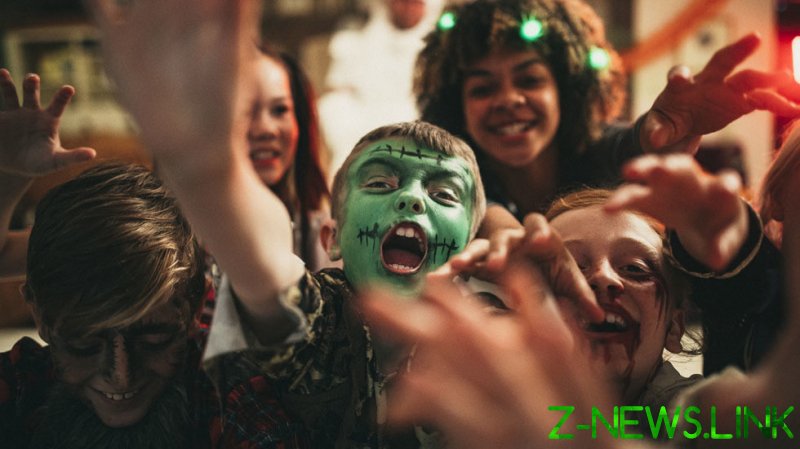 If you’re a transsexual or a non-binary bore, then it’s a fate far worse than death and being resurrected as a zombie. It’s way worse than Dracula sinking his fangs in your neck. It’ll hurt far more than a werewolf tearing you to shreds.

And that’s the mortal pain of… BEING OFFENDED. For the hyper-sensitive wokey folk, Halloween truly is a nightmare. They’d be better off staying indoors, shutting the curtains and turning off all the lights and not, whatever happens, answering the door…

There could be kids standing on the doorstep dressed up, quite literally, in an array of dangerously offensive garb. It could be enough to give one of the tiresomely woke PC brigade a cardiac arrest. Or – far worse for those kids simply dead set on having a bit of fun in fancy dress – it could be an opportunity to deliver a tedious lecture on the complexities and sensitivities wrapped up in one’s gender.

A word of warning, too, for the wokeys. If you do stay behind locked doors this Halloween, whatever you do, don’t switch on Netflix! The ‘transphobic’ comic Dave Chappelle is waiting inside that little glass box and he’s out to get you too. They haven’t managed to cancel him, at least not yet.

For the rest of us, especially parents with wokeish sympathies, Halloween truly is a costume drama. What exactly can you and your kids actually wear to pass all the fresh tests that trans women have set for the rest of the world?

Yes, that’s what I just typed: trans WOMEN. Come on, people, let’s be very clear here – it’s almost always the women who have been born with a penis who make the most fuss. And the non-binary types too, more often than not, shouting the loudest, are those in possession of male genitalia. The keyboard warriors scream and rant on Twitter and Instagram and Facebook, then you might see maybe a couple of dozen or so at a demo.

They actually have a big, singular goal in mind, though, one that could put a red line through half the human race and lead to the cancellation of the entire female gender. Despite all modern-day legislation to the contrary, it still boils down to women being bullied – for the most part – by men. These men just happen to be wearing dresses.

So, if you truly want to make sure you offend nobody this Halloween, here are a few tips. But, I assure you, even if you avoid all of this stuff, it still won’t be enough – because the perpetually offended are perpetually seeking things by which to be offended. It’s kind of what they do. It’s a culture war without end, the struggle entirely defines who these blokes – sorry, I mean these people – are.

Don’t, whatever you do, change your kid’s race. If little Kylie wants to dress up as Pocahontas or Bud fancies playing Maui from Moana, just don’t go there. There are too many explosive devices hidden within those Disney flicks. Your kids would be guilty of cultural appropriation. And that would offend the perpetually offended.

As a boffin at the Smithsonian, Renee Gokey, told National Geographic: “It’s as if someone in your classroom, or someone who has a lot of power and privilege, takes your school project or idea, and they put their name on it and try to take credit for it,”  she said. “In a way, it’s a form of stealing.” And that would offend the perpetually offended.

A geisha outfit? Nope, off limits. How about going out as a ‘Voodoo Queen’ or some kind of a demonic rasta? Don’t be absurd. Dressing in drag? That’ll get you cancelled for sure. And it would, of course, offend the perpetually offended.

If you’re a white person, then, everything you do is sure to offend someone within the ranks of the perpetually offended who have taken over our culture (they’ll never take over the actual real world, as the average Joe and Jane Blow on the street can see through all this idiocy) anyway.

I have a solution though, a life hack. It’s the same as what the condemned used to do on the gallows, just before they fell and swung from their necks until dead. Read out a prepared statement – a statement prepared by someone else ‘in the know’ – declaring your white privilege, and you’ll be fine. The perpetually offended won’t be offended at that.

Then you can do whatever the hell you like for Halloween.

Send your kids out in the most anti-woke costume you can possibly dream up and watch the perpetually offended REALLY scream. Maybe a drag queen zombie or a ‘someone’ with a serious bloody wound where their crotch should be? How about a non-binary Nazi vampire with breasts AND a penis?

Halloween will be a scream, which is what it’s supposed to be all about, anyway. A fun time will be had by all. And the perpetually offended? Well, they’ll be offended, of course. But they love being offended, really. So everyone’s a winner.