Home / WORLD / D’oh! Democrats are discovering that ‘defunding the police’ means ‘slaughter on the streets’ and voters are furious

D’oh! Democrats are discovering that ‘defunding the police’ means ‘slaughter on the streets’ and voters are furious 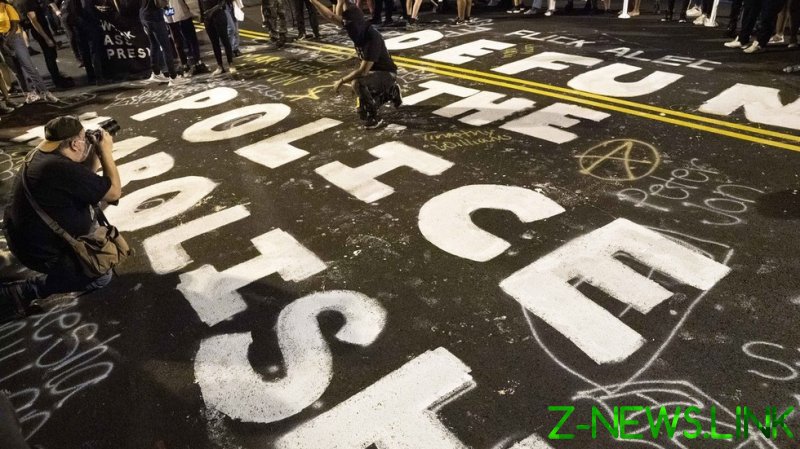 With violent crime on the rise, the Democratic Party fears it may start paying a political price for supporting last year’s massive street protests that saw Black Lives Matter and Antifa demonstrators loot and torch a billion-dollar swath of destruction from sea to shining sea following the killing of George Floyd by a white police officer.

Despite their destructive rampage, the modern-day Vandals were not shunned from polite society (as were the pro-Trump ‘insurrectionists,’ by the way, who did little more than flash-mob the Capitol Building on January 6). Instead, the mob enjoyed massive corporate sponsorship, a merciful judicial system that returned criminals to the streets and, most incredibly, the neutering of those public servants who were trying to stop their murderous rampage – the menacing men in blue.

The social justice zealots of the Democratic Party, who took it as gospel that the majority of police officers are racist, argued that crime would disappear if society simply got rid of police departments. So, like a scene out of the movie ‘Jackass,’ the dreamers put their deranged theory to the test by creating a cop-free autonomous zone smack in the heart of Seattle, Washington. And for a brief, drug-induced moment it looked like they just might pull it off.

Caught up in the euphoria of street performers, live music and second-hand marijuana smoke, USA Today described the six city blocks of chaos as “a mini-Burning Man festival, complete with its own corps of volunteer street cleaners and medics, as well as dreadlocked white girls blowing soap bubbles and taking selfies…”

Not to be outdone, Seattle’s then-Mayor Jenny Durkan, who did nothing as the city’s police precinct was first attacked and then evacuated, described the descent into anarchy as a “summer of love.” That clueless comment – which aged almost as well as CNN’s “fiery but mostly peaceful” remark – forced Durkan into an early retirement.

Seattle’s experiment in cop-free living – which saw marauding bands of thugs descend on the streets as night fell – lasted less than one month once people started getting killed. Despite proving for themselves that defunding the police due to a few rotten apples in the ranks is not the answer, Democratic cities and states got busy slashing police budgets just to appease the woke vigilantes among them.

New York City, for example, was among 20 major cities that severely defunded police budgets. Last year, Mayor Bill de Blasio, who helped to paint a massive, bright yellow Black Lives Matter mural in front of Trump Tower in Manhattan (while ordering the police to stand guard over it) slashed $1 billion from the police budget, which had stood at a whopping $6 billion in 2020. The NYPD, the largest police force in the country, employs some 36,000 officers and 19,000 civilian staff.

Meanwhile, the city of Austin, a bastion of liberalism inside the red state of Texas, last summer cut $21.5 million from its police budget while shifting another $128 million from the police department to other departments. Percentage-wise, these reductions were the largest in the nation.

So did peace magically break out inside of America’s urban centers now that all of those ‘racist’ cops were gone? Of course not. In Austin, the murder tally for 2021 has just surpassed 50, the worst rate in three decades with four months of the year still left to go. In New York City, residents search for reasons to explain a dramatic spike in gun crimes. Meanwhile, in Washington, DC, where last month six-year-old Nyiah Courtney was shot and killed in a drive-by shooting while standing at an intersection with her mother, homicides are up about 5% over this time last year.

So it should come as no surprise that many Democrats are not only distancing themselves from the ‘defund the police’ madness, they are now attempting to beef up their police departments as crime rates across the country soar. But those Democrats who allowed the mob to run wild across the country last summer, while, at the same time, slashing and trashing the police, should be made to pay the piper when the next elections roll around. And such a change of political fortune may be on the horizon.

In a survey published last month by USA Today/Ipsos, it was discovered that nearly three-quarters of Americans (72%) have a favorable opinion of police and law enforcement. Slightly fewer, 64%, said they trust law enforcement to handle crime and public safety issues. Perhaps most shockingly for Democrats, more than three-quarters (77%) of Americans “support deploying more police officers to street patrols and similar levels (70%) support increasing police department budgets.”

This extremely high level of support among Americans for law enforcement does not flush with the Democrats’ dire message that the police are the root of all evil. There are even those who suggest that all the talk about ‘racist cops’ was part of a ploy to create as much civil strife as possible as Americans were preparing to cast their votes in what was one of the most consequential presidential elections in recent memory.

That may seem far-fetched, but there were certainly many observers who found it suspicious that so many Democratic mayors and governors failed to respond in any meaningful way to the violent protests that destroyed large portions of their cities and states last summer. This placed former President Donald Trump in a classic ‘damned if you do, damned if you don’t’ dilemma where the media would crucify him for whatever action he took.

Whatever the case may be, the Democrats must be held accountable at the ballot box for contributing to the ‘miscarriage of justice’ that harmed not only the reputation of America’s many honorable police officers, but placed millions of citizens directly in harm’s way.