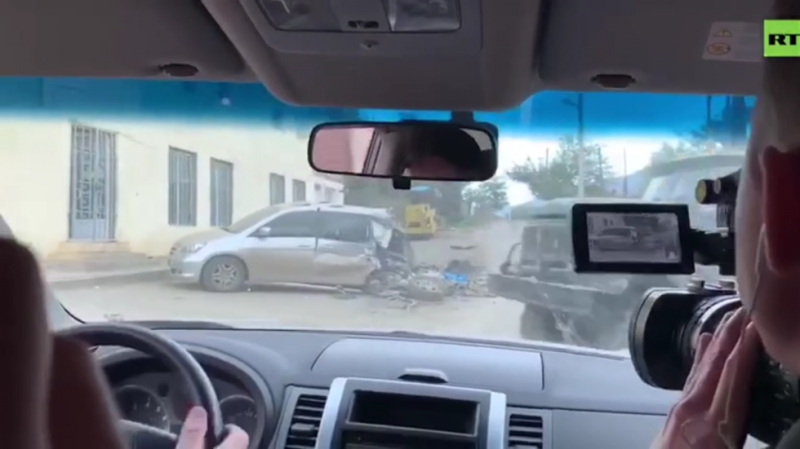 RT’s Igor Zhdanov traveled to the small town, which has been the subject of conflicting claims by Azerbaijan and Armenia amid the ongoing flare-up in the breakaway region. It is located in the southeast of the territory that the self-proclaimed Nagorno-Karabakh Republic keeps under its control in the wake of the 1990s war with Azerbaijan.

On Friday, President Ilham Aliyev of Azerbaijan reported that Hadrut had been “liberated” by the national armed forces. On Sunday, the Azerbaijani Defense Ministry insisted the town remained under its control. Nagorno-Karabakh’s authorities denied losing the town, and said an Azerbaijani raiding party launched a surprise attack on Friday, but that the “enemy” had been repelled.

Baku’s claims at least partially differ from the reality on the ground, Zhdanov reported after visiting the town on Sunday. The part of Hadrut he managed to get to was still controlled by Nagorno-Karabakh forces, he said. Intense fighting was underway in the area, with heavy artillery shelling by both sides. On the way back to Stepanakert, he witnessed at least two airstrikes nearby, he said.

The fighting continues despite a ceasefire which is supposed to be in force in Nagorno-Karabakh. Azerbaijan, which claims the territory as its own, and Armenia, which backs the breakaway republic militarily, agreed to stop hostilities starting midday Saturday and to take a humanitarian pause. The parties have since repeatedly accused each other of violating the agreement.