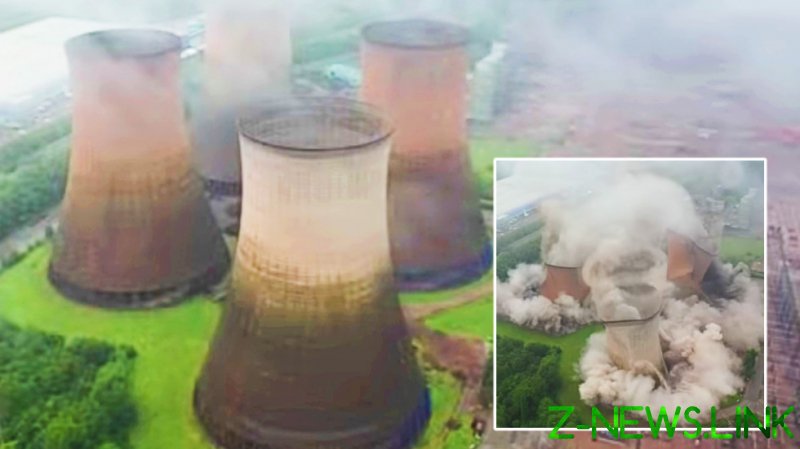 The Rugeley Power Station towers, which were made of reinforced concrete and once used to cool up to six million gallons of water an hour, were demolished in seconds in the Midlands town they take their name from on Sunday – grounding an icon of the region forever in a historic dismantling that crowds gathered to see.

While the 380ft symbols of industrial Britain crashed to earth, local footballers were unperturbed as they carried on with their game despite a huge bang emanating from the distance behind them, where the sight of the towers tumbling abruptly made for a dramatic sight on the skyline.

Dust clouds filled the sky and some of the players involved appeared to be briefly distracted following a corner, but the remarkable event otherwise appeared to pass without note in the scheme of the showdown between two teams identified by one photographer as Brereton Lion FC and Dormans FC, of the Stafford and District Sunday Football League.

The continuation of the match provided a contrast to some local areas, including a road where a demolition exclusion zone was set up for almost 10 hours, attended by police.

More than 10,000 people were said to have tuned in to a livestream of the late-morning demolition, which was the ninth to have been arranged at the site.

While some social media viewers took the opportunity to lampoon Premier League stars such as Jack Grealish by likening them to structures susceptible to going to ground, others marveled at the sight of a seismic historical event taking place while footballers continued to concentrate purely on their sporting aims.

“Probably the best crowd they’ve ever had there,” laughed one. “And they weren’t even there for the match.”

Parkland, a school, thousands of homes for families and “employment space” are expected to be built on the vast plot left behind by the towers.