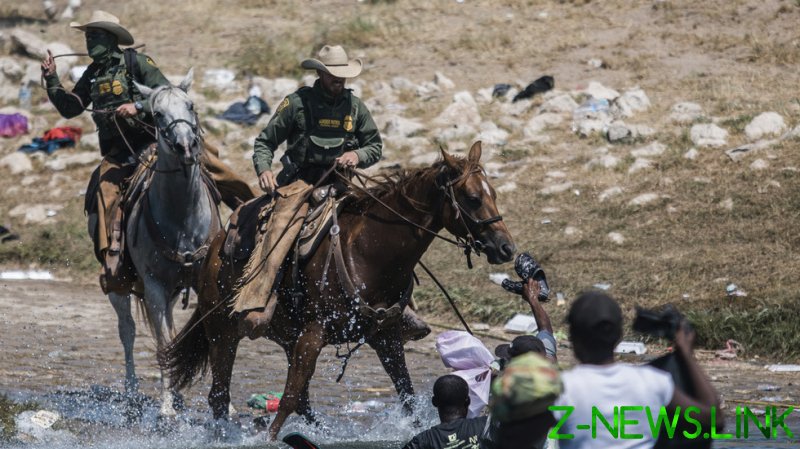 Amid the ongoing drama with migrants crossing the US-Mexico border at a stretch of the Rio Grande near the small Texas town of Del Rio, a Democrat activist claimed that mounted BP agents were “rounding up Haitian refugees with whips.”

“This is unfathomable cruelty towards people fleeing disaster and political ruin. The administration must stop this,” tweeted Sawyer Hackett, director of People First Future, a political action committee set up by Democrat Julian Castro.

Hackett posted a photo taken by AFP, as well as a video from the border, showing mounted BP agents trying in vain to stop Haitian migrants from wading back and forth across the river. One of the men in the video says, in Spanish, that he was crossing back into Mexico to buy food and diapers for his children.

“Immigration should not be a crime, and its criminalization is a relatively recent invention. This is a stain on our country,” said Congresswoman Alexandria Ocasio-Cortez (D-New York), retweeting Hackett. She also argued that the US immigration system “is designed for cruelty towards and dehumanization of immigrants.”

“I have seen some of the footage. I don’t have the full context. I can’t imagine what context would make that appropriate,” Psaki said at one point.

Border Patrol officials have repeatedly told reporters their agents do not carry whips, and that the objects seen in the photos and videos are reins for the horses. Agents will “also spin them sometimes to deter people from getting too close to the horse,” one official told Townhall’s Julio Rosas, but added they were “not aware of anyone being struck with the reins.”
This was confirmed by none other than Homeland Security Secretary Alejandro Mayorkas, who gave a press conference in Del Rio on Monday. He said the long reins are used by mounted agents to “ensure control of the horse” and that agents don’t carry whips, but also pledged to “investigate the facts” of the case.

At one point in the video shared by Hackett, a mounted BP agent can be seen spinning the reins, but at no point do photos or videos show anyone getting hit.

More than 15,000 migrants, overwhelmingly of Haitian origin, have crossed into Del Rio over the past week, and are crowded under a highway bridge in increasingly inhumane conditions. The Biden administration has reportedly flown 320 or so back to Haiti so far, with more flights scheduled. However, Border Patrol officials said that only single men will be deported, while families will be allowed to enter the US, with notices to appear at asylum hearings later.

One of the reasons the man in the video spoke Spanish is that very few of these migrants were actually coming directly from Haiti. According to reporters on the border, they had been living in various Latin American countries – as distant as Chile – but made their way to the US after hearing the Biden administration was stopping deportations, letting in asylum-seekers, and trying to put millions of illegal migrants on a path to citizenship.

However, the courts have since pushed back on these policies, and over the weekend the Senate parliamentarian ruled that what amounted to mass amnesty could not be considered a transitory budget measure.

More than a million migrants crossing into the US illegally have been detained by the Border Patrol this year. The Biden administration has denied there was a migrant crisis, called the surge “seasonal,” and blamed climate change and poverty. Critics, including former President Donald Trump, have accused the White House of opening the border to uncontrolled migration.

“The largest number of illegal aliens in the history of our Country are pouring in by the millions,” Trump said in a statement on Sunday. “They are totally unchecked and unvetted, can do whatever they want, and go wherever they want. Our Country is rapidly becoming a cesspool of humanity.”