Home / WORLD / Defiant Clinton tells Twitter to call her ‘Madam Chancellor,’ as fans fantasize on her being POTUS & critics call her ‘Palpatine’

Defiant Clinton tells Twitter to call her ‘Madam Chancellor,’ as fans fantasize on her being POTUS & critics call her ‘Palpatine’ 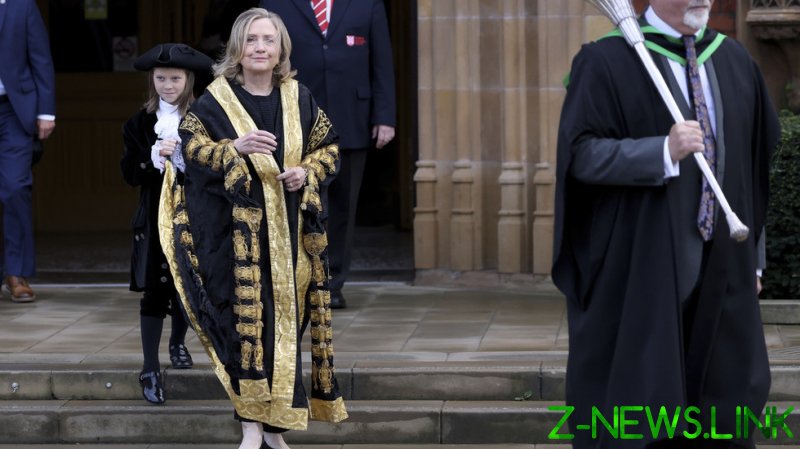 Clinton became the chancellor of Queen’s University on Friday to the cries of “war criminal” from a small crowd of hecklers outside, but reactions to her visit and social media mockery of the images of her wardrobe have done little to deter her from celebrating the newly-acquired title.

“Just call me Madam Chancellor,” Clinton tweeted on Saturday, attaching images of her in her large gown at Friday’s ceremony, while a child carries her cape behind her.

However, not even Clinton’s supporters have apparently wanted to refer to the former Secretary of State as “chancellor”: her most loyal fans responded by fantasizing about calling her “Madame President,” getting the term trending with some cringe tweets.

“Oh how I would’ve loved to have called you Madam President,” one user wrote in response to Clinton’s pictures.

Meanwhile, others mocked the idea of Clinton receiving a ‘Madam Chancellor’ title as a consolation prize in place of ‘Madam President’.

Clinton received her five-year chancellor term in 2020, but the actual inauguration had been postponed due to the Covid-19 pandemic. The title is largely symbolic, but includes Clinton representing the school abroad and having speaking engagements at ceremonies. While the president and vice-chancellor of Queen’s University, Ian Greer, has welcomed “an internationally recognised public servant who has demonstrated a longstanding commitment to Northern Ireland” into her new role, protesters blasted the university over their “shameful” support of the hawkish Democrat.