Home / WORLD / De Bruyne has ‘almost no chance’ for Euro 2020 and will not make Russia opener, ex-national team doctor warns after horror injury

De Bruyne has ‘almost no chance’ for Euro 2020 and will not make Russia opener, ex-national team doctor warns after horror injury 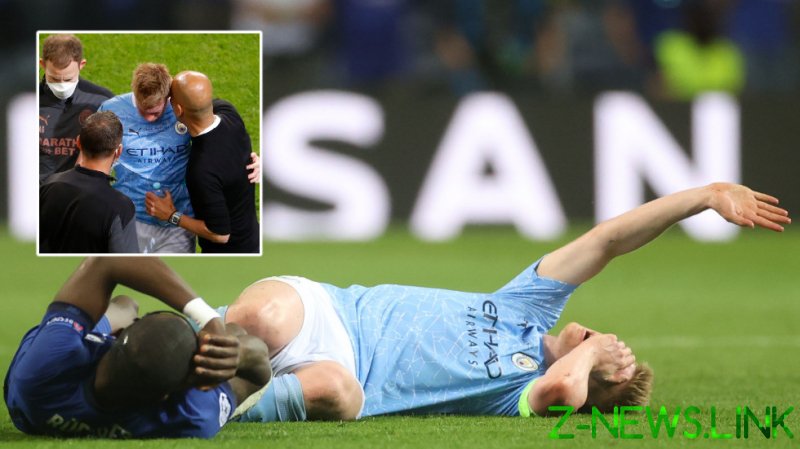 Belgium are due to play Russia in their opening match of the tournament on March 12, and fans and angered Red Devils manager Roberto Martinez had reason to feel hopeful after dynamo De Bruyne publicly declared he was “OK” following his horrific nose and eye socket fracture after being smashed in the face by Antonio Rudiger.

That reassurance has been dashed by former Spartak Moscow and Russia doctor Yuri Vasilkov, who says the brutal blow that forced De Bruyne out in the second half of his side’s 1-0 defeat to Chelsea is usually a combat sports injury and could keep the midfielder out until mid-July.

“The eye socket is a very delicate bone,” the expert told Championat, assessing the “serious injury” that left De Bruyne howling in pain on the sidelines.

“You saw that a bruise immediately appeared on his face. The central nervous system is nearby, so the eyes are very serious. Kevin de Bruyne will definitely miss the match against the Russian national team.

“Even with all the desire, [he] will not be able to enter the field.

“There are almost no chances to compete at the European Championship with such an unpleasant injury.

“It requires a lengthy recovery process. Kevin will be able to train and play only after a month and a half – and even then, probably, wearing a mask.”

Arguably Belgium’s best player, Premier League winner De Bruyne reported back from hospital the day after Saturday’s final to reveal that he had an “acute nose bone fracture and left orbital fracture.”

“Still disappointed about yesterday, obviously, but we will be back,” he added, in an imprecise update on his own condition.

Vasilkov echoed the views of fans who likened the impact of De Bruyne’s ordeal to more traditionally violent sports.

“Personally, I have not encountered eye socket fractures in football,” he said.

“If it were American football, I would understand, but in football this is a rarity. It is more of a boxing injury.”