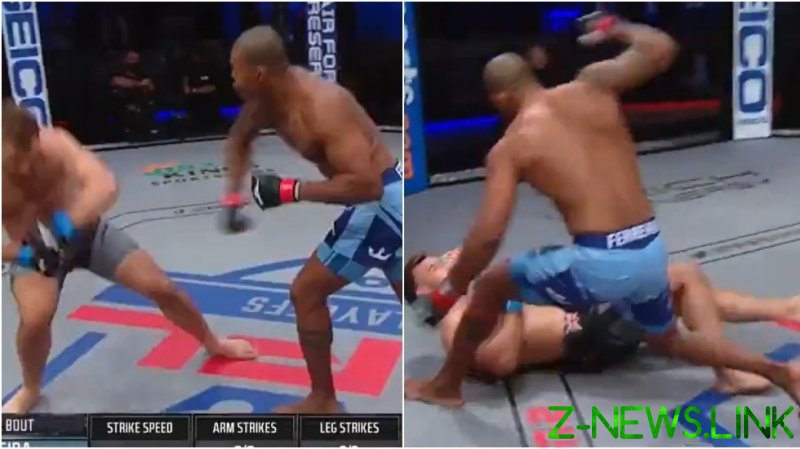 Ferreira – who stands 6ft 8in tall – starched Austin with an explosive right hand in the early stages of their heavyweight meeting at the top of the prelim card at the 2021 PFL Playoffs 2 in Florida.

After sending the Brit bouncing off the canvas, Ferreira momentarily looked as if he could land unnecessary further damage on the dazed Austin but mercifully pulled back when primed to hammer home another blow with his right hand.

The contest was waved off, giving ‘Problema’ a second win from his three outings in the PFL – while earning him praise for his quick-thinking in not subjecting Austin to more pain.

“Props to Ferreira not going for that last punch. Held back at last second,” wrote one fan.

“That takes great control,” replied another, while one Twitter user wrote: “What awareness to not throw extra punches after the knockout. Love to see it.”

“Damnnn respect for not landing another one,” came the response from elsewhere, while another labeled Ferreira’s actions as “classy G sh*t.”

Ferreira, 31, has been a colorful presence in the PFL since making his debut in the promotion with a controversial contest with Brazilian icon Fabricio Werdum in May.

Ferreira claimed a first-round knockout win on the night despite appearing to tap to his fellow Brazilian earlier in the fight. The result was later overturned and declared a no contest.

A post shared by Renan Ferreira "the problem" (@renan_problema_mma)

Ferreira had been scheduled to face former Bellator fighter Austin in June, but the bout was cancelled, and the big Brazilian instead went on to defeat Carl Seumanutafa on points.

Despite Thursday’s fireworks Ferreira failed to qualify for this year’s PFL heavyweight playoffs, but nonetheless looks like lurking in the ranks as a threat for next year’s tournament.

Austin, meanwhile, suffered defeat on his PFL debut and slipped to 15-7 overall in his pro career.