Cyber attack in Ukraine revealed details about the virus-the extortioner 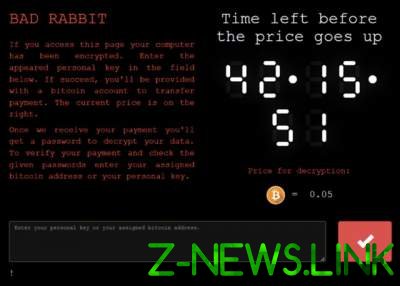 In Ukraine is gaining momentum hacking the sites. Such attacks occur in Russia. Experts said that at the moment we know about the new viruses-extortionist.

The first attack was reported by the airport “Odessa” and the Ministry of Infrastructure. In Odessa, delayed flights, not working electronic system code reader, ticket outta the scoreboard. People issued tickets, drawn by hand.

Also not working is the old website of the State aviation service of Ukraine, the new functions in a usual mode.

Later it became known that the attack was subjected to the Kiev metro system – now it is impossible to pay the fare by credit card. Otherwise the subway is running normally.

In Russia was completely paralyzed the work of news agencies “Interfax” and “Fontanka”.

Today’s attack is not similar to recent viruses or WannaCry Petya. According to experts of the company Group-IB, Russian media attacked cryptographer Badrabbit (“bad rabbit”).

Tweet Group-IB published screen shots of infected computers. Hackers demand ransom in bitcoin and promise to pass a password to access information after receiving the required amount. The ransom amount is 0.05 bitcoin.

The rapid response team, computer emergency events in Ukraine, which functions under the State service of special communication and protection of information previously warned about the possible cyber attack in connection with a phishing recorded the distribution of banking virus Zeus.

On June 27, Ukraine and other countries affected by the virus Petya.A, which penetrated computers via accounting software M.E.Doc. Among the casualties were banks, state and commercial enterprises, mobile operators.