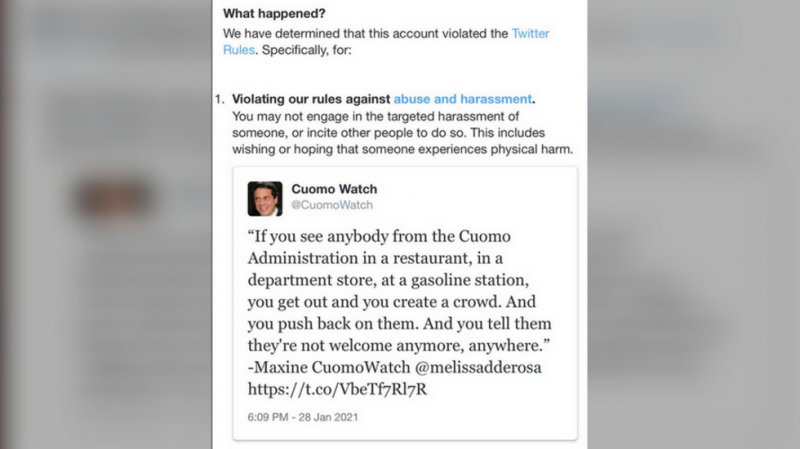 Twitter told the user @CuomoWatch that his account was locked for violating the policy against “targeted harassment” because the January 28 post was inciting violence and hoping someone might experience physical harm, according to a screenshot posted Friday afternoon by Donald Trump Jr.

The former president’s son noted that the user was quoting verbatim the rant by Waters, only substituting “Cuomo” for “Trump.”

“If you see anybody from that Cabinet in a restaurant, in a department store, at a gasoline station, you get out and you create a crowd and you push back on them, and you tell them they’re not welcome anymore, anywhere,” Waters told a crowd in California in June 2018. She later repeated it on television as well.

Democrats had organized protests targeting Trump administration officials over the president’s immigration policy seeking to deter illegal border crossings. The Biden administration’s first actions were to revoke Trump’s border policies and say immigrants, refugees and asylum-seekers will be welcome to the US in record numbers.

Cuomo, a Democrat, has drawn criticism from New Yorkers of all political persuasions over his draconian Covid-19 lockdown policies – but mainly for his orders that those infected with the coronavirus be admitted to nursing homes, resulting in the deaths of over 15,000 of elderly patients.

Earlier this week, a Cuomo aide admitted they were hiding the exact extent of the disaster so as to keep the Justice Department under Trump from investigating and prosecuting them, sparking fresh condemnations. According to the aide herself, the stonewalling worked and the DOJ never opened a probe.

Twitter has also faced criticism for what appears to be highly selective and arbitrary enforcement of its rules. While a Cuomo’s critic was banned for parody, the same rule was used in October to ban a self-described socialist over a metaphor, and the conservative undercover journalism shop Project Veritas was “permanently suspended” on Thursday for allegedly doxxing a Facebook executive.

However, Twitter decided that the anti-Trump ex-Republicans at the Lincoln Project were not in violation of their rules, even after posting improperly obtained private messages in order to shame a former employee and a reporter.