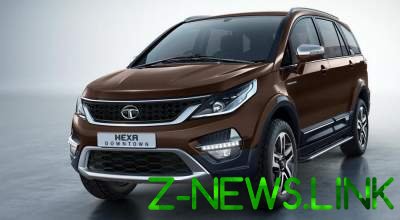 Indian company has developed a special model of SUV Hexa.

The body of the crossover in this version, painted in brown color, the headlights came chrome bezel, chrome plated and exterior mirror housings. Hexa still got side steps.

The new chair may be upholstered in brown leather. In the armrest located between the front seats, hidden wireless charging. In addition, for the rear passengers of the Tata Hexa Downtown Urban Edition has two touch screen a diagonal of 10.1 inches each.

See also:  In Geneva debuted the harbinger of a seven-seat crossover SsangYong

Also available for the model: the multimedia system with touch screen navigation and the ability to sync with your smartphone, rear camera, heated seats, JBL sound system with ten speakers, six airbags, ABS, EBD and ESP.

The crossover is equipped with a 2.2 diesel engine with a capacity of 150 or 156 HP, transmission – five – or six-speed “mechanics”, six-speed “automatic” and rear – wheel drive or full. Tata Hexa can be purchased in six – or seven-seat versions.

Price Downtown Urban Edition has not yet been announced, a standard SUV is anywhere from 1 172 000 rupees is approximately 434 500 UAH on the current exchange rate.