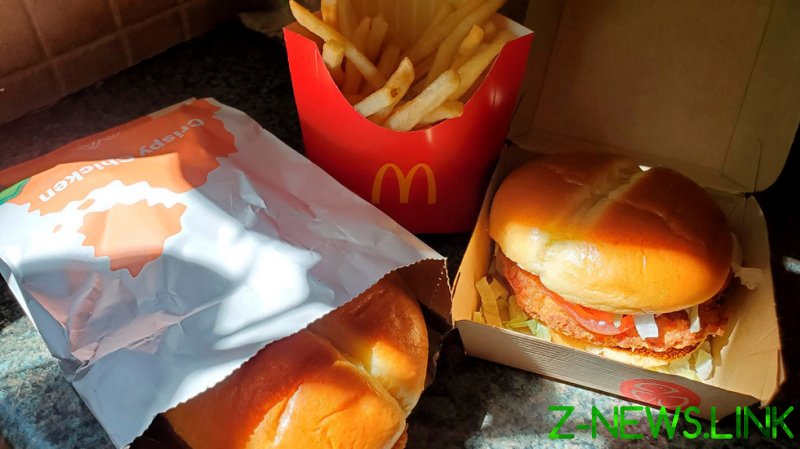 ‘If you wish to learn who rules over you, simply find out who you are not allowed to criticize,’ goes the famous saying. If that is true, then Americans are being ruled by a truly domineering tyrant, who can’t bear to hear advice that just might save the entire kingdom.

Jonathan Neman, CEO of the upscale salad chain Sweetgreen, broke some uncomfortable truths to the millions of Americans who are bursting around the waistline: being obese in the age of Covid could lead to their even more untimely death.

“78% of hospitalizations due to COVID are Obese and Overweight people,” Neman stated in a LinkedIn post that went viral. “Is there an underlying problem that perhaps we have not given enough attention to? Is there another way to think about how we tackle ‘healthcare’ by addressing the root cause?”

“We have been quick to put in place Mask and Vaccine Mandates but zero conversation on HEALTH MANDATES,” continued the CEO, as he waded unknowingly into alligator-infested swamp water. “All the while we have printed unlimited money to soften the blow the shutdowns have caused to our country.”

Despite prefacing his argument with as much virtue signaling padding as possible, emphasizing that he was not an anti-vaxxer and thought vaccines a grand idea, it didn’t matter to the woke pack. Neman had committed the unforgivable crime of stating facts at a deranged moment in American history when the infantile, self-consumed audience has no other desire than to be lulled asleep with a candy-coated simulacrum of reality.

And it wasn’t as though the CEO was misrepresenting the truth. The Centers for Disease Control and Prevention, for example, described the grim reality facing overweight and obese Americans as thus: “As clinicians develop care plans for COVID-19 patients, they should consider the risk for severe outcomes in patients with higher BMIs [Body Mass Index], especially for those with severe obesity…[which is] a risk factor for both hospitalization and death.”

Funnily enough, no social justice warriors were reported accusing the CDC of ‘fat shaming’ with the release of that sobering study.  In the case of Jonathan Neman, however, the mob came out in full flabby force, howling in collective pain, attempting to portray the successful businessman as a playground bully who spends his days teasing portly children. Thus, in a script that has been played out on numerous occasions in the past, the American CEO –  himself the actual victim of online bullying – deleted the ‘offensive’ post which had triggered the latest leftist conniption fit.

What made the attack on Neman particularly unsettling is that it was initiated by those fearless corporate-owned defenders of misinformation known as the mainstream media. Despite the vast number of publications in existence, not one broke from the pack to hint that maybe, just maybe, Jonathan Neman was right and that it might be in America’s best interests to lay off the fries for a bit.

Vice, the publication that first squealed about Neman’s “offensive” commentary, said that “it’s impossible to separate his comments from the fact that he profits directly from a particular (and costly) idea of ‘health.’”

As the writer Edward Ongweso argued, because Mr. Neman happens to be the owner of a health food chain he would stand to personally gain from any government initiatives to prohibit or tax junk foods that are making millions of Americans too sick and ill-prepared to tackle a flight of stairs, let alone a deadly virus. In other words, Neman’s just another capitalist pig out to make a quick buck. That sounds almost as absurd as governments enforcing lockdowns on small business owners just so global corporate behemoths like Walmart and Amazon can make a killing, or Big Pharma remaining disinterested in prioritizing the health of Americans because that would negatively affect their massive profit margins. Yet that is exactly what happened at the height of the pandemic, and I don’t recall Vice, or any other corporate rag shedding a single tear over that tragic state of affairs, which destroyed countless businesses not to mention families.

In any case, it seems that what really incited the mob to rise up against Mr. Neman was his bold and ambitious proposal to “incentivize health.”

“What if we made the food that is making us sick illegal? What if we taxed processed food and refined sugar to pay for the impact of the pandemic? What if we incentivized health,” he asked, to crickets.

Imagine that! Actually provide the people with sustenance that does not lead to their ultimate death and demise in the long run. Eureka, Watson, we may be onto something here!

But here comes the kicker that certainly sent shockwaves through America’s food industry, perhaps unleashing the mob as well: “Repairing our food system could save us $2 Trillion a year in direct costs ($1T in Healthcare, $1T in Environmental Impact).”

In other words, it’s perfectly fine when the corporate monsters of the universe deliberately destroy millions of small business owners and swoop in like vultures to pick over the bones. But the moment somebody at the bottom of the food chain threatens the bottom line of the corporate overlords, even to improve the wellbeing of the entire nation, expect nothing less than sound and fury.