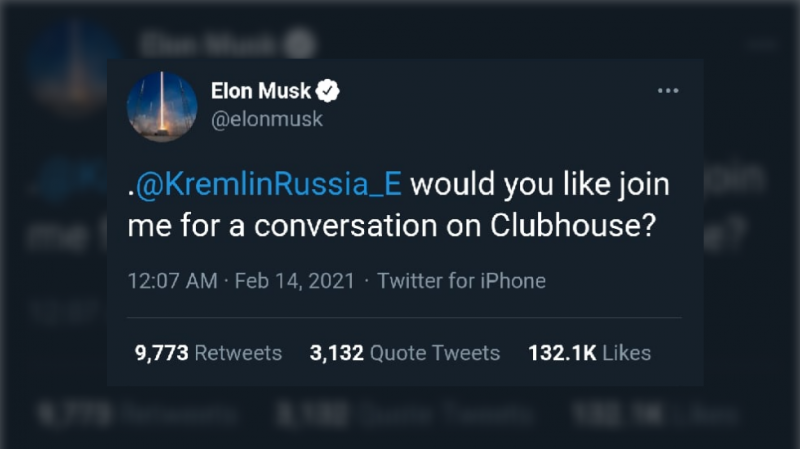 On Saturday, the Tesla CEO, and World’s current richest man, tweeted at the official Twitter handle of the president of Russia, asking, “Would you like to join me for a conversation on Clubhouse?”

Flexing his linguistic skills, Musk added in Russian: “It would be a great honor to speak with you.” However, he didn’t specify which language would be used for the proposed chat. As well as his native tongue, Putin speaks fluent German, and reasonably good English.

The Kremlin has not yet reacted to the invitation, but it’s well known that Putin doesn’t use the internet, which he regards as a “CIA project.”

Clubhouse is an invitation-only social media platform that uses audio instead of text. Although the app allows for private voice chats, Clubhouse has also hosted large, conference-like events, during which people can tune in to listen to conversations between high-profile figures.

Musk’s offer caused a sensation on social media, with people expressing support for the proposal and guessing what the pair would talk about.

One commenter joked that if the conversation happens, Musk might convince Putin to make dogecoin Russia’s currency. The Tesla and SpaceX founder has repeatedly joked about the meme-based cryptocurrency, sending its value skyrocketing.

Others suggested Musk’s vision of colonizing Mars could help thaw chilly relations between Moscow and Washington.

Several people wondered whether Putin was even on the platform, and offered to give Putin an invite to Clubhouse, if he needed one.

RT’s Max Keiser used the tweet to offer his own invite to Musk, asking if he wanted to discuss bitcoin.

Musk has recently taken a liking to Clubhouse, and made waves during a recent discussion on the platform, when he predicted that bitcoin was on the verge of broad acceptance in the financial sector.

On Wednesday, the billionaire businessman announced he would be participating in a Clubhouse discussion with rapper Kanye West, but didn’t elaborate on when the talk would take place or what would be discussed.

“The most entertaining outcome is the most likely,” he predicted in reference to the yet-to-be-held virtual interview.