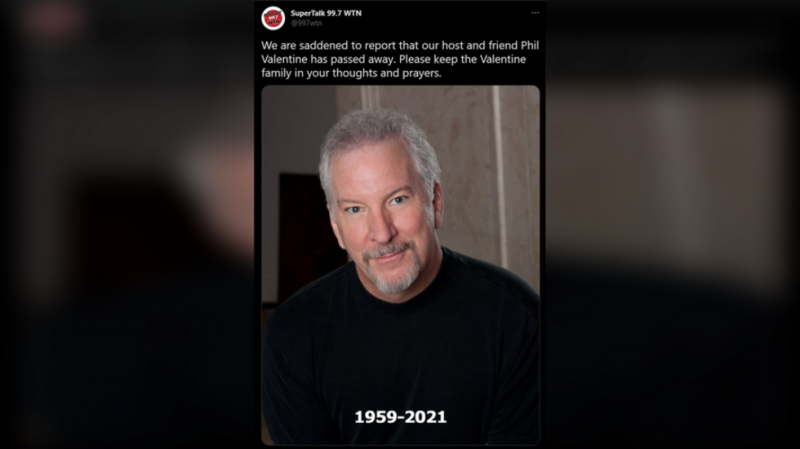 Phil Valentine, who for years hosted a show for a Nashville, Tennessee radio station, died on Saturday after being diagnosed with Covid-19. His hospitalization and resulting death have received national media attention due to his critical stance on Covid-19 vaccines.

In a Facebook post dated July 11, Valentine announced that he had the virus but that “unfortunately for the haters out there, it looks like I’m going to make it.” The conservative talk show host added that he was feeling well enough to get back on the air but that he might take a day off as a precautionary measure.

However, it appears that his condition rapidly deteriorated. His brother, Mark Valentine, posted an update on July 22 saying that Phil had been hospitalized and was in “very serious condition” as he battled “Covid pneumonia and the attendant side effects.” About a week later, on July 30, Mark had been hooked up to ECMO bypass, a life support system typically used on patients suffering from heart or lung failure, or when patients undergo open-heart surgery.

The intrusive procedure has been described as a “last ditch” and “Hail Mary” option for Covid-19 patients. The medical intervention has had mixed results. Some hospitals have claimed a 50-60% survival rate for Covid patients who undergo ECMO. But data from the earliest days of the pandemic showed that only one in six patients put on ECMO in Wuhan, China lived. It’s unclear if Valentine remained on life support until his death.

Mark later claimed that he was sure his sedated brother would change his stance on vaccines if he were able to communicate.

His passing sparked applause among many Twitter users, who insisted that the 61-year-old had it coming. Many others posted sarcastic comments pretending to mourn the “great loss.”

Others said they were suffering from “compassion fatigue” and struggled to feel compassion for unvaccinated individuals.

“Nice to get some good news on a Saturday night. One less voice to spread misinformation and distrust,” read one comment, arguing that Valentine was guilty of killing others by advocating against the vaccine.

While current data suggests that severe infection related to Covid is uncommon among fully vaccinated people, the jabs do not stop transmission of the virus. And while deaths are also rare, reports have emerged of vaccinated people succumbing to the virus.

While many apparently lack empathy for unvaccinated people who die from Covid-19, similar harsh judgment seems to be less common when discussing Tennessee’s other deadly epidemic: drug overdoses.

Since the start of the Covid-19 pandemic, Davidson county has recorded 989 Covid-related deaths.

While health officials have criticized Tennessee’s low vaccination rate compared to other parts of the country, it’s understandable why many in the state many distrust pharmaceutical companies behind the jabs: Last month, Johnson & Johnson, a firm that developed one of several Covid vaccines currently on the market, agreed to a $26 billion deal to fund treatment and prevention programs after the pharmaceutical giant was accused of fueled an ongoing opioid epidemic in several states, including Tennessee.