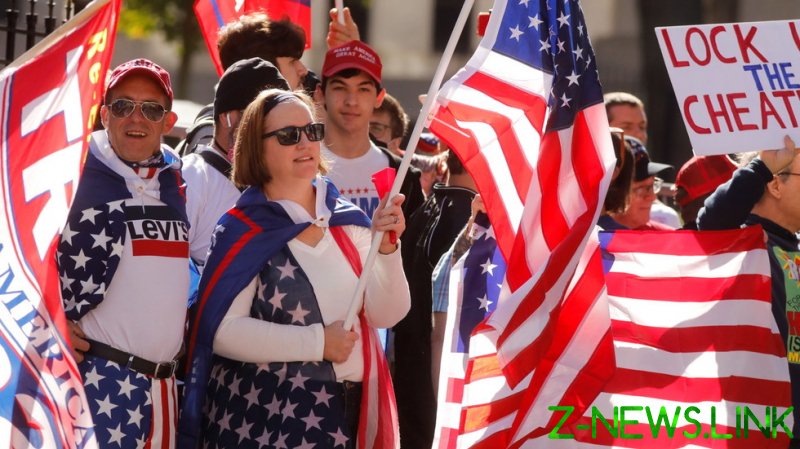 Supporters of President Donald Trump gathered in Atlanta on Saturday to protest Georgia’s recent hand recount of ballots, which showed Joe Biden beating Trump in the battle for the White House. Trump himself has demanded a more thorough audit of the election, calling the recount – which did not check signatures against voter rolls – a “meaningless tally.”

With a rally planned outside the State Capitol at noon, some supporters headed beforehand to CNN’s headquarters, waving US flags and ‘Make America Great Again’ banners.

Founder of the anti-Democrat #walkaway movement Brandon Straka led the crowd in a chant of “shame on you!” declaring that the “fake news in this country cannot be trusted, and they’ve got to go.”

“CNN sucks!” the crowd then shouted.

Throughout his four years in office, President Trump has repeatedly accused CNN of bias and derided its reporters. Chants of “CNN sucks” were frequently heard at his campaign rallies, and Trump himself has called the network “sick,” “corrupt,” and “fake news.”

The feeling is apparently mutual. In the two days before Trump’s supporters rallied outside its headquarters, CNN’s headlines declared that Trump “undercuts American democracy,” is “sabotaging Biden – and America,” and is attempting to “steal the election” by issuing legal challenges against Biden’s apparent win.

“It’s Donald Trump vs. democracy,” one article read. “Which side are you on?”

Georgia Governor Brian Kemp certified the state’s election results on Friday, which showed Biden winning the state by a margin of just over 12,000 votes. Kemp drew outrage from some Trump supporters for signing off on the results, but said in a press conference later on Friday that the law required him to “formalize the certification, which paves the way for the Trump campaign to pursue other legal options and a separate recount if they choose.”

Responding to the certification, Trump campaign lawyer Jenna Ellis said that the recount simply recounted “all of the illegal ballots that had been included in the total.” She added that the campaign will “pursue all legal options to ensure that only legal ballots are counted.”

At the moment of publication of this article, CNN’s website did not appear to cover any of the protests.