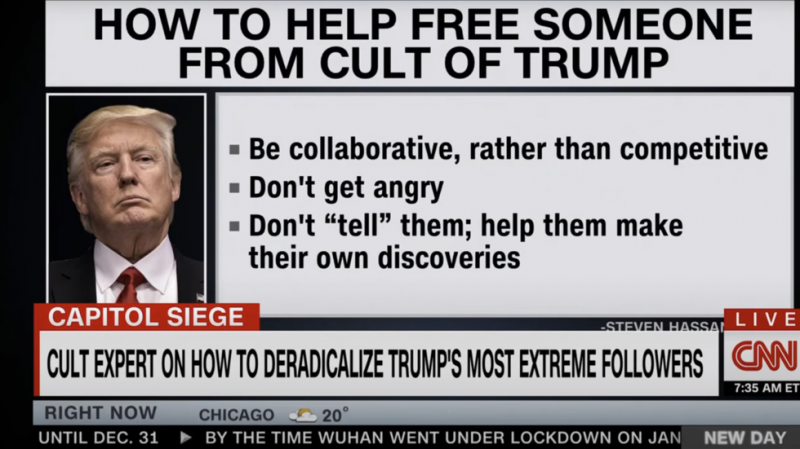 Cult expert Steven Hassan was on Tuesday brought on CNN to advise on how to deprogram members of what he described in his 2019 book as the “Cult of Trump.” Perhaps with an eye toward boosting his deprogramming business, however, he suggested the entire country was in need of his services.

After CNN anchor Alisyn Camerota spoke of the Trump supporters who’d thronged the Capitol earlier this month as if they were no longer living, dramatically intoning over footage of the raid that “some of the people that you see here were once elementary school counselors, some of these people were firemen,” she asked Hassan how Trump had “radically changed their personality.”

A former member of the infamous Unification Church (better known as the ‘Moonies’) during the 1970s, Hassan suggested Trump devotees had been “deceptively recruited by an authoritarian political cult” and had undergone a “radical personality change” psychologically diagnosable as “dissociative disorder.”

While he briefly described how cult leaders use control of behavior, information, thought, and emotion to “create a new identity that’s dependent and obedient,” he stopped short of explaining how Trump would have done this.

As Camerota bemoaned how long Hassan’s one-on-one deprogramming approach would take to brainwash (or re-brainwash) millions of Americans, the cult counselor acknowledged “we’re going to need a top-down approach,” even suggesting he be invited to testify in front of Congress.

“The bottom line is all of America needs deprogramming because we’ve all been negatively influenced by Donald Trump,” he said.

Trump supporters did not take kindly to being deemed cult members.

Some pointed out that the accusations leveled at Trump supporters could just as easily be lobbed back at their accusers – specifically the part of Hassan’s checklist in which the cult member is discouraged from seeking “outside” sources of information and gaslighted with revised versions of the past.

Though some seemed to take pride in embodying elements of the cult behavior checklist.

It’s understandable that anyone would bristle at being told they’ve been duped by a cult. But Hassan’s advice for people looking to deprogram their Trump-supporting loved ones ironically bore little resemblance to CNN’s usual derisive coverage of a contingent that – despite the network’s best efforts – comprises millions of Americans. The professional deprogrammer advised his host that to encourage cultists to start thinking for themselves, “the most powerful technique is asking a respectful, thoughtful question and being quiet and really waiting a long time for an answer.”

The network is far from alone in suggesting Trump supporters need deprogramming. Washington Post columnist Eugene Robinson appeared on MSNBC earlier this month with New York Times writer Nikole Hannah-Jones to lament that there are “millions of Americans, almost all white, almost all Republicans who somehow need to be deprogrammed…as if they are members of a cult.” Democratic congresswoman Alexandria Ocasio-Cortez was more circumspect with her call to deprogram “white supremacists,” though many others in her party have suggested the two categories are one and the same.