Home / WORLD / Clinton’s ‘novel,’ a mix of self-worship & cringe attacks on Trump, is proof politicians should keep their fiction off the page

Clinton’s ‘novel,’ a mix of self-worship & cringe attacks on Trump, is proof politicians should keep their fiction off the page 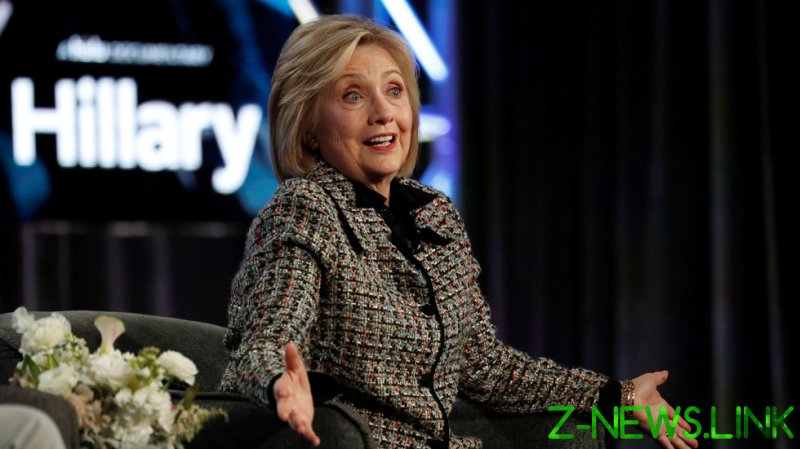 Politicians using book deals to keep their profile relevant is nothing new. Considering the amount of memoirs that have been written by former Trump White House staffers, we should be expecting one from the janitorial staff before the year is up.

Some, however, cannot settle for just spilling their political views onto the page, so they try their hands at fiction. Typically, politicians are pretty good at fiction, especially the longer they have held office, but you’d be hard-pressed to find a novel with a senator or congressman’s name on it that is worth reading. ‘State of Terror’ by Hillary Clinton and Canadian author Louise Penny doesn’t change this.

The book, out today, follows Ellen Adams, a newly-appointed secretary of state forced to step down from her media empire for her new assignment. As the president addresses Congress for the first time, bombings are reported in major cities around the world. Adams begins her globe-trotting adventure to discover who is behind the chaos and stop future bombings.

The story itself is fairly inconsequential. By the time you are two-thirds of the way through the novel, Penny and Clinton have lost themselves so deeply in various characters and story beats, that it’s difficult to keep track of what matters.

The truly baffling bits come from Adams herself and her interactions with several characters, who are such obvious stand-ins for Clinton’s political enemies that there are moments where the text borders on parody.

In the world of ‘State of Terror,’ the previous one-term president is a charismatic but hateful leader who now spends his days golfing in Florida. Some refer to him as “Eric the Dumb” or “President Dumb.” This Republican’s presidency is an obvious liberal filter over Trump’s time in office as it’s described as an administration with “near-criminal incompetence” that committed such atrocities as pulling “out of a nuclear accord deal with Iran.” How… clever?

This version of Trump is also surrounded by enablers who wish to put him back in power and despise “America’s diversity.” This is an obvious nod to Clinton’s endless talk of a “vast right-wing conspiracy” at work against her and the country.

Putin appears to get a mention too because Clinton can’t help but design a world where an essential police state is the only answer to our problems. Russia, the Middle East, etc. are all out to get America, the world’s ‘leader,’ which must step up and save everyone through the brilliance of Hillary– I mean, Ellen Adams.

“Maxim Ivanov stood in the middle of the room, not moving. Forcing Ellen to go to him, which she did. These petty gestures, meant to insult, had no effect on her,” the book reads when referring to the Russian president.

Clinton’s attempts to tie Russia to a vague conspiracy theory about stealing the 2016 US presidential election and giving it to the “illegitimate” Trump didn’t pan out, so now she’s reduced herself to creating fictional scenes where she can throw out petty insults at others, while also complimenting herself.

Clinton’s screed is full of moments like that, where our hero must display patience and use her mental prowess to overcome all these pesky men and their low-key misogyny.

That’s what’s most outrageous about Clinton’s ‘novel’: it’s not really a novel at all. This is a spoiled child creating a thinly-veiled fantasy world that plays directly into her ego. It would likely be completely unreadable had Penny not been brought in as a ‘ghostwriter’ (though it feels like even she loses track of what were no doubt Clinton’s endless ideas).

While almost every other character in the novel is described as somehow inferior to our secretary of state (especially if they are men), the writers make it clear they are in love with this woman. Even her seeming faults are wrapped in compliments.

When introducing the character in the opening pages, Adams is described as “trim” and “elegant.”

“A good dress sense and Spanx concealed her love of eclairs. Her makeup was subtle, bringing out her intelligent blue eyes while not trying to hide her age,” the text reads.

Clinton, however, doesn’t deserve the full blame for this. Artists have long built fantasies around her that have clouded the truth for many people. Few can name actual political accomplishments that outweigh Clinton’s more questionable decisions, but Hollywood has served up navel-gazing hero worship for the former secretary of state and her fans for years now, and they don’t try all that hard to hide it.

CBS ran ‘Madam Secretary’ for six seasons. The Tea Leoni-starring drama was never much to talk about, but it had a protagonist modeled after some fantasy version of Clinton (who would herself even appear in the show). Clinton’s time as secretary of state wasn’t filled with the sort of heroics you see in the show. The wars in the Middle East raged on, and her most well-known moment was the mess that came after the 2012 Benghazi terror attack, which left four Americans dead. Clinton’s seeming inability to explain the motivations behind the attack and the lack of preparedness led to one of her many political scandals. ‘Madam Secretary’ and ‘State of Terror,’ however, provide an opportunity to push a fictional narrative around Clinton, while branding it ‘fiction.’

We have also gotten cringe rap songs and other lame television cameos, all in an effort to send the message: see, she’s not so bad!

The navel-gazing is stomach-churning when actual artists reduce themselves to it, but it’s downright embarrassing seeing someone perform this sort of worship on themselves.