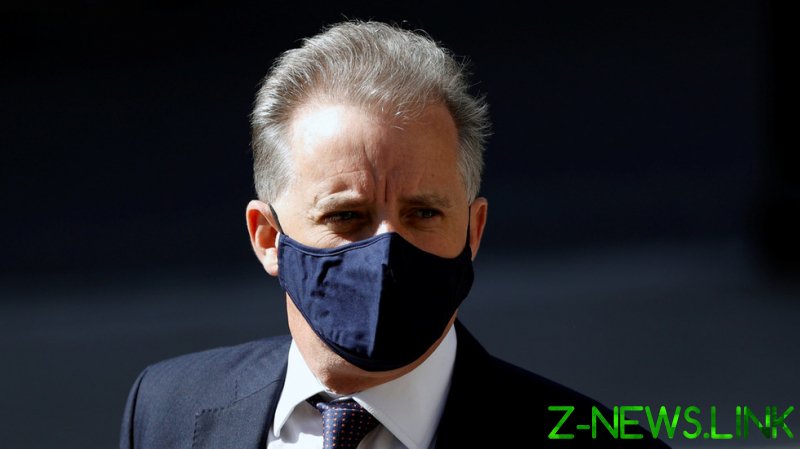 On the morning of January 20, it was announced former US president Donald Trump had ordered the declassification of a binder full of previously unreleased documents pertaining to the FBI’s Crossfire Hurricane probe into Trump’s alleged collusion with Russia.

In what’s said to be the first instalment of a batch, two documents have since been released. Oddly, the first – a set of notes taken by Bureau representatives who met with former MI6 operative Christopher Steele, author of the now-notorious ‘Trump-Russia’ dossier in September 2017 – is just a slightly less redacted version of a document released in December 2020.

More substantively, the second is the FBI’s full ‘FD-302’ interview summary of that meeting, which took place in London’s Grosvenor Hotel. Eyebrow-raising nuggets are dotted throughout the 28-page file.

Pick a horse, any horse

For one, the writeup of the meeting reveals the former MI6 spy was accompanied by Christopher Burrows, an associate at Steele’s private intelligence firm Orbis, for the first hour. He used the opportunity to say he was “pretty upset” with how Orbis’ relationship with the FBI concluded, given the “time and effort” it took to get information to the agency.

While he was producing his dodgy dossier, Steele was also a paid informant for the FBI, although his contract was terminated in November 2016 for speaking to the media. The previous month, Mother Jones had reported on the existence of the dossier, but Steele was unnamed, referred to instead variously as a “former Western intelligence officer” and a “veteran spy.”

Discussing his work with journalists was directly contrary to his agreement with the Bureau, and his FBI controller believed breaking this covenant to be a clear indication Steele was “completely untrustworthy,”“could not be handled,” and “would not be reliable.”

Burrows and Steele apologized and explained that Orbis was “riding two horses” – opposition research firm Fusion GPS, which had been commissioned to dig up dirt on Trump by the Democratic Party, and the FBI.

After Bureau Director James Comey reopened the agency’s investigation into Hillary Clinton’s secret use of a private email server for official public communications, they felt they had to pick “one horse,” and chose their client.

“They followed what their client wanted, and spoke to the press,” the 302 records. “Steele commented that it was not about money owed, but Burrows remarked that [while] Steele might not be concerned about the money, but Burrows was (sic).”

‘Massive impact on our lives’

It wasn’t merely monetary issues that caused the Orbis chiefs grief. They expressed “frustration” to the FBI that the dossier had been included in the ‘Intelligence Community Assessment on Russian Activities and Intentions in Recent Elections’ (ICA), published in January 2017.

“Steele and Burrows felt that they should have had advance warning that the company’s reporting was going to be used in the annex. The inclusion… and subsequent public leak of the annex put Steele’s name out there and had a ‘massive impact on our lives,’” the 302 states.

The Bureau representatives’ response, if any, isn’t recorded in the writeup – but how the ICA came to be compiled, and the dossier included therein, is a murky story indeed.

In September 2020, it was revealed that only a small minority within US intelligence were of the view Russia had attempted to impact the outcome of the 2016 vote, with several senior analysts concluding the Kremlin in fact banked on a Clinton victory, and considered Trump to be a “wild card.”

However, then-CIA director John Brennan moved aggressively to not only exclude all dissenting voices from the ICA, but also include the dossier, on the basis some of its contents were “consistent with the judgment in the assessment.” In other words, Steele’s memos furthered the one-sided, minority view the assessment reflected.

Coincidentally, the same month the ICA was published, the FBI quizzed Steele’s “primary subsource” for the dossier, Brookings Institute staffer Igor Danchenko. Danchenko confessed to having no contacts within the Kremlin, and selling Steele “rumor and speculation” provided by his Moscow drinking buddies.

Either interpretation may account for why Steele still stood so strongly by his subsource, boasting of how Danchenko had “provided information used in earlier, non-election related reporting provided to the FBI,” and “his reporting was consistent over multiple projects,” which Steele “used as a vetting and validation point of reference.” The former MI6 operative also lied to the Bureau pair outright, claiming to have confirmed Danchenko’s reporting “through other sources.”

To further reinforce his subsource’s credibility, Steele noted Danchenko “exhibited behavior indicative of someone who is scared,” framing this as one of several “positive signs” that his subsource had delivered 28-carat intelligence, along with the fact he “went to ground in early 2017.”

An alternative explanation for Danchenko’s disappearing act at that time, of course, could be his contemporaneous FBI interview, and a resultant desire to both escape the international web of fantasy and deceit Steele had dragged him into, and shield himself from potential reprisal.

The ex-spy also disclosed to the Bureau he’d been introduced to Danchenko by Fiona Hill, deputy assistant to the president and senior director for Europe and Russia on the National Security Council between April 2017 and July 2019.

This occurred in 2011 – Steele stated that Hill had “a very high opinion” of Danchenko, and suggested he “take a look at him.” Given the warm and long-lasting relationship between Steele and Hill, it’s understandable her recommendation was followed up.

“Hill is one of Steele’s close friends, later described in the interview that his wife went to university with Hill, and that Hill’s daughter is named after a now-deceased mutual college friend of Hill and his wife,” the 302 continues.

It’s unclear if Hill was aware at the time that Danchenko had been arrested, jailed and convicted years earlier on multiple public drunkenness and disorderly conduct charges in the Washington area and ordered to undergo substance abuse and mental wellness counseling.

Conversely, Hill – who testified for 10 hours at Trump’s 2019 impeachment hearing – almost certainly had no way of knowing Danchenko was also at one time investigated by the FBI as a potential espionage agent.

At a “work-related event in late 2008,” around the time Barack Obama was preparing to take office, Danchenko approached two Brookings staffers and said that if either of them “[got] a job in the government and had access to classified information,” he “knew some people to whom they could speak” if they wanted wanted “to make a little extra money.”

One was so suspicious they alerted the FBI, which launched an investigation – it found he was “an associate of two counterintelligence subjects” and “had contact in 2006 with the Russian Embassy and known Russian intelligence officers.”

Further digging raised yet more concerns, and in July 2010 the Bureau applied for a FISA warrant to put Danchenko under surveillance – however, before its approval was secured, Danchenko left the US, and the probe was shelved.

Towards the end of the 302, Steele is recorded as “advising” the FBI representatives that his “favourite” part of the dossier “involved Michael Cohen, Webzilla, and Alexej Gubarev.”

This refers to the dynamite dual-claim that Trump’s then-attorney Cohen secretly traveled to Prague in August 2016 to meet aides of Russian President Vladimir Putin and arrange hush payments to hackers who stole the Democratic National Convention’s emails, and that a tech firm founded by a Russian entrepreneur had been involved in the cyberattack operation, under coercion by the FSB.

Cohen vigorously denied he’d ever been in Prague, a denial supported by his passport lacking a Czech Republic stamp, and a travel itinerary for a trip he’d taken to California concurrent with the alleged visit.

Still that narrative refused to die, with Western media sending teams of journalists to the Czech capital on fruitless investigations and reporting anonymous claims that Robert Mueller had evidence to confirm it.

However, the special counsel report ultimately concluded Cohen “never traveled to Prague,” and was moreover “not concerned” about such allegations, as they were “provably false.”

And what of Webzilla? In October 2020, the Wall Street Journal revealed Steele’s ultimate source for the charges against the company and its chief was Olga Galkina, a long-term friend of Danchenko, who in 2016 had been working in Cyprus at an affiliate of XBT Holding SA, the web-services parent of Webzilla, owned by Gubarev.

Things weren’t going well in the office however, to the point that her manager filed a statement with police over her conduct. It stated that she was chronically late to work, sometimes appeared to be intoxicated on-the-job, and had threatened to have him killed unless he paid her €10,000 ($11,740) in compensation.

In November that year, her employment was finally terminated, and weeks later the disgruntled problem drinker implicated Webzilla and Gubarev in the purported hacking.