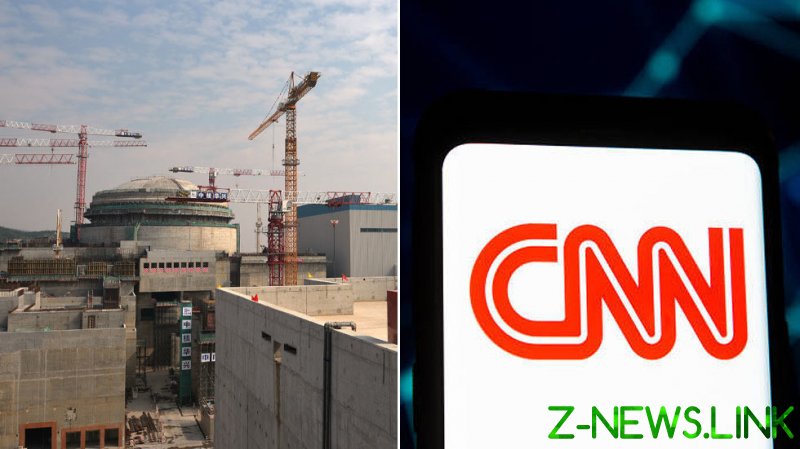 The ministry published an interview with “the relevant person in charge of the Ministry of Ecology and Environment (National Nuclear Safety Administration)” who answered questions from reporters, on its website on Wednesday, without giving the name of the official. The publication refers to CNN’s report on the Taishan Nuclear Power Plant in Guangdong province that was released on Monday.

In the report, CNN said that the US government had been assessing a reported leak at a Chinese nuclear power plant, after a “French company that part owns and helps operate the facility warned of an imminent radiological threat.” The report went on to claim that China’s Nuclear Safety authority was raising the acceptable limits for radiation detection outside the Taishan Nuclear Power Plant in order to avoid having to shut it down, citing a letter from the French company to the US Department of Energy.

The Chinese ministry has refuted the claim of a radioactive leak. The official in the interview confirmed that an increase in the level of radioactivity has been recorded in one of the units of the plant (the primary circuit of Unit 1) and “is completely different from a radiological leakage accident.” The ministry explains that the increase is inside a reactor and is mainly related to the damage of the fuel rods, which is an unavoidable and common phenomenon that happens during fuel manufacturing, transportation and loading. The two radioactive safety barriers of the reactor – the coolant system and the containment tightness – meet the requirements and are safe, which means there is no threat of a radioactive leak, it insists. The ministry says the radiation level outside the plant is normal which confirms there’s been no leak and it has guaranteed the operational safety of the nuclear power plant.

The ministry has also dismissed CNN’s claim that the National Nuclear Safety Administration approved an increase in the acceptable limit of radiation detection outside the Taishan Nuclear Power Plant in order to avoid having to shut it down as “not true.”

It explains that the National Nuclear Safety Administration reviewed and approved the relevant limits for the specific activity of the noble gas used as a coolant in the reactor – “a limit used for operation management that has nothing to do with the external radiation detection of the nuclear power plant. The concept in the CNN report is wrong,” reads the statement.

The ministry says it will continue to closely monitor the radioactivity level of the primary circuit of Unit 1 of Taishan Nuclear Power Plant, strengthen on-site supervision and environmental monitoring, and also maintain communication with the International Atomic Energy Agency and the French nuclear safety regulatory authority.

EDF said there was a “performance issue” with the build-up of noble gases (krypton and xenon, according to AFP news agency) that are used for cooling the reactor and have radioactive qualities. The issue – a “known phenomenon, studied and provided for in the reactor operating procedures,” was resolved, Reuters quoted the company as saying.

“We are not in a scenario of an accident with a melting core,” an EDF spokesman told AFP. State-run CGN has also said operations at the plant met safety regulations and the surrounding environment was safe.

The UN atomic watchdog, the International Atomic Energy Agency, said it had no indication that a radiological incident had occurred.

The CNN report said the Biden administration believed the facility was not yet at a “crisis level” and that the US officials felt the situation did not pose a severe safety threat to workers at the plant or the Chinese public at the moment.