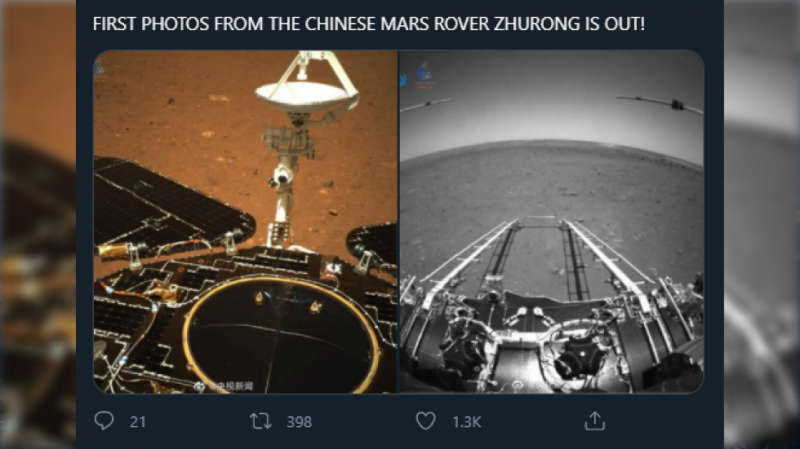 On Wednesday, the CNSA published two images taken by Zhurong, showing a successful landing on the red planet. The images show the deployment of the landing platform, the rover’s departure ramp, solar wing, antenna and other mechanisms. The rover is carrying out preparations before leaving the landing platform and beginning its mission.

Photos also show that the terrain ahead is clear.

Zhurong had been orbiting the red plant aboard Tianwen-1 since February and touched down in its lander for the first time on May 14. The Tianwen-1 spacecraft had been taking photos and providing information to assess whether conditions for landing in Utopia Planitia were safe. Zhurong touched down at the same sizeable impact basin where NASA’s Viking 2 landed in 1976.

Zhurong is around 1.8 metres tall and weighs 240 kilograms, much smaller than NASA’s Curiosity and Perseverance rovers, the latter of which landed in February.

The CNSA rover is well-equipped for its geological mission, with an arsenal of cameras, ground-penetrating radar, a weather station, a magnetic field detector as well as an instrument to assess the chemical composition of rock and other particles.

The Tianwen-1 project is China’s first solo interplanetary mission after a collaboration with Russia in 2011 didn’t make it out of Earth’s orbit.