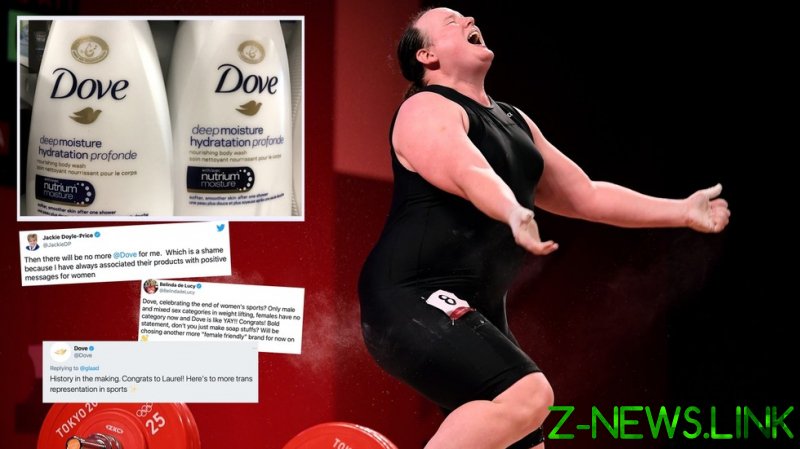 On Monday Hubbard became the first openly transgender athlete to compete at an Olympic Games when the New Zealand super heavyweight took part in the women’s +87kg snatch at Tokyo 2020.

Hubbard failed to register a weight from three attempts which put paid to any hopes of qualification despite the clean and jerk event still to go.

Hubbard’s inclusion in Japan was highly controversial, with some believing the 43-year-old, who transitioned to a female aged 35, represented a “triumph for inclusivity”, while others simply stated Hubbard was a “millionaire middle-aged white man” taking titles from women.

A tweet from toiletries giant Dove, formerly recognised as a female-friendly brand, in response to a tweet from GLAAD, the LGBT-acceptance media monitoring NGO, has recently resurfaced and drawn the ire of the very people it purported to represent – women.

“History in the making. Congrats to Laurel! Here’s to more trans representation in sports,” Dove’s account wrote on July 20, responding to a GLAAD tweet that mentioned Hubbard is “the first transgender to qualify among 54,000 Olympians and Paralympians over the last 17 years” and signed off with “Trans people belong in sports.”

UK conservative party member Jackie Doyle-Price was the first to voice her displeasure, tweeting: “Then there will be no more Dove for me. Which is a shame because I have always associated their products with positive messages for women.”

Doyle-Price’s tweet then triggered a backlash from other women, including ex-member of the EU parliament Belinda de Lucy who wrote: “Dove, celebrating the end of women’s sports?

“Only male and mixed sex categories in weight lifting, females have no category now and Dove is like YAY!! Congrats! Bold statement, don’t you just make soap stuffs? Will be chosing [sic] another more “female friendly” brand for now on.”

History PhD student Lottie Lewis said: “I’ve been a Dove customer for years, no more. Why are you replying to this group with such a political message!

“You think a millionaire middle-aged white man easily taking titles from young [women of color] at the top of their game is in line with your brand values?”

Another Twitter user commented: “Your virtue signalling just lost you a customer. Women’s sport is for women not mediocre male cheats. Ps. I’m not against trans representation in sports just in the correct category – our sports are sex based not gender.”

After a much covered journey to Tokyo shrouded in controversy, Hubbard failed to register a single lift in the competition. Following the failure, Hubbard expressed hope that the inclusion would be “a small part of history”.

“As we move into a new and more understanding world, people are starting to realise that people like me are just people. We are human and as such I hope that just by being here is enough,” Hubbard said, Reuters reported.