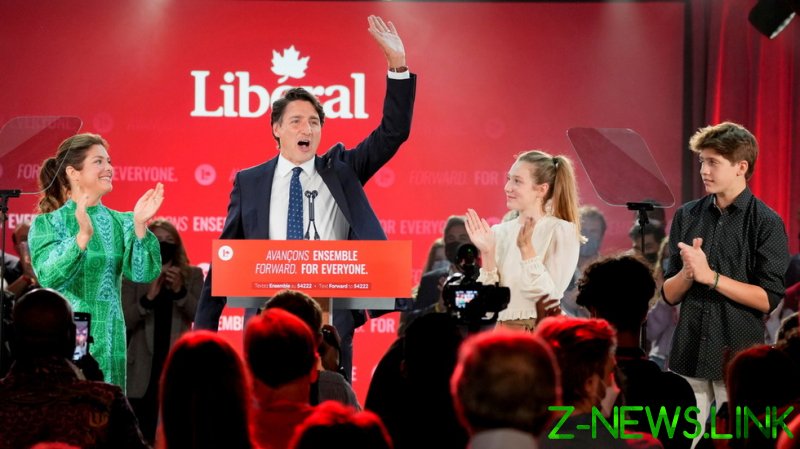 “Thank you, Canada,” Trudeau, who won his third term as PM, wrote on Twitter. The Leftist leader said he was grateful to the Canadians “for putting your trust in the Liberal team, for choosing a brighter future.”

In his speech before a small group of supporters in Montreal, Trudeau claimed the results of the election meant he now had a “clear mandate to get Canada through this pandemic.”

The vote count is still underway, but TV networks project that the liberals will be able to form a minority government as a result of the vote. According to Elections Canada, Trudeau’s party got 158 seats, while the majority requires 170.

The prime minister also insisted that Canadians didn’t want to hear about the election anymore. He himself called the vote two years earlier than scheduled in an apparent attempt to strengthen his position by capitalizing on the government’s handling of the Covid-19 pandemic, which included a large-scale vaccination drive and financial support for businesses and individuals affected by the curbs.

But the plan didn’t fully work out as the tight race for the parliament delivered results that were almost identical to the 2019 vote. As a consequence, Trudeau, who had been in power since 2015, would still require support from other parties to promote his policies.

Shortly before Trudeau’s speech, the leader of Canada’s main opposition Conservative Party, Erin O’Toole, conceded defeat in the election. He told his supporters outside Toronto that he had already called the PM and congratulated him on the outcome.

However, O’Toole pointed out that “Canadians did not give Mr. Trudeau the majority mandate he wanted.”

The Conservative Party, which opposes the liberal push for vaccine mandates and suggests that the coronavirus should be tackled through voluntary inoculations and rapid testing, has been in the lead in 122 electoral districts.