Home / WORLD / Building collapse in Miami feared to have killed dozens as search stretches on over 12 hours with no new rescues, 99 still missing

Building collapse in Miami feared to have killed dozens as search stretches on over 12 hours with no new rescues, 99 still missing 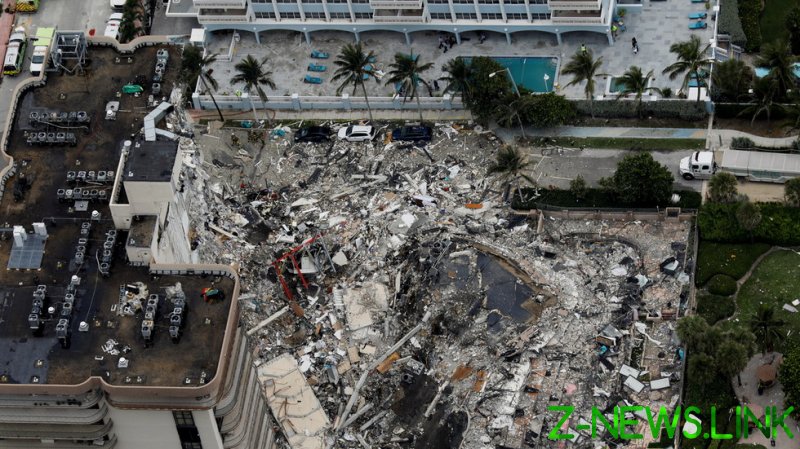 Miami-Dade County’s Assistant Fire Chief Ray Jadallah confirmed 55 apartment units on the building’s northeast side had totally collapsed, with 35 people rescued from the wreckage of the 12-story building and ten “assessed and treated” on site. A further two were sent to nearby hospitals, where one died.

While estimates of those unaccounted for were much lower initially, 99 people are still missing as of Thursday afternoon, according to Miami-Dade Police Director Freddy Ramirez. He also described the scene as “a very dangerous site” and “very unstable” for rescue workers.

Surfside Town Manager Andrew Hyatt acknowledged that search and rescue missions could take “at least a week.” More deaths are feared, given the scale of the destruction.

“This is a catastrophic failure of that building and we need to try to understand what happened, obviously the foundation somehow was undermined and the whole thing came down,” Burkett told NBC’s Today News on Thursday morning.

“It looks like a bomb went off but we’re pretty sure a bomb didn’t go off.”

Some 80 emergency units responded to the disaster, arriving from early Thursday morning to help rescue tenants still trapped in the building.

A police investigation is underway and the cause of the collapse is not yet known. However, authorities were reluctant to allow nearby residents to take up shelter in the adjoining building, noting that a third of the structure was “pancaked” and filling it with people could lead to further catastrophe.